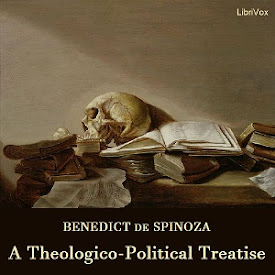 Written by the Dutch philosopher Baruch Spinoza, the Tractatus Theologico-Politicus or Theologico-Political Treatise was one of the most controversial texts of the early modern period. It was a preemptive defense of Spinoza's later work, Ethics, published posthumously in 1677, for which he anticipated harsh criticism. In the treatise, Spinoza put forth his most systematic critique of Judaism, and all organized religion in general. Spinoza argued that theology and philosophy must be kept separate, particularly in the reading of scripture. Whereas the goal of theology is obedience, philosophy aims at understanding rational truth. Scripture does not teach philosophy and thus cannot be made to conform with it, otherwise the meaning of scripture will be distorted. Conversely, if reason is made subservient to scripture, then, Spinoza argues, "the prejudices of a common people of long ago... will gain a hold on his understanding and darken it." He reinterpreted the belief that there were such things as prophecy, miracles, or supernatural occurrences. He argued that God acts solely by the laws of "his own nature". He rejected the view that God had a particular end game or purpose to advance in the course of events; to Spinoza, those who believed so were only creating a delusion for themselves out of fear. (Summary from Wikipedia) (9 hr 59 min)

Why should we place Christ at the top and summit of the human race? Was he kinder, more forgiving, more self-sacrificing than Buddha? Was he wiser, did he meet death with more perfect calmness, than Socrates? Was he more patient, more charitable, than Epictetus? Was he a greater philosopher, a deeper thinker, than Epicurus? In what respect was he the superior of Zoroaster? Was he gentler than Lao-tsze, more universal than Confucius? Were his ideas of human rights and duties superior to those of Zeno? Did he express grander truths than Cicero? Was his mind subtler than Spinoza’s? Was his brain equal to Kepler’s or Newton’s? Was he grander in death – a sublimer martyr than Bruno? Was he in intelligence, in the force and beauty of expression, in breadth and scope of thought, in wealth of illustration, in aptness of comparison, in knowledge of the human brain and heart, of all passions, hopes and fears, the equal of Shakespeare, the greatest of the human race?

What a fantastic and easy book to follow. He sprints through all his ideas effortlessly. One of my favorites thankyou to the reader and librivox. ❤️💜💙