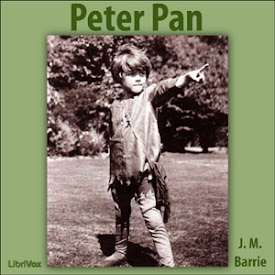 In both the play and the novel, Peter often visits the "real world" of London to listen in on bedtime stories told by Mary Darling to her children. One night, Peter is spotted, and while trying to escape, he loses his shadow. On returning to claim his shadow, he wakes Mary's daughter, Wendy Darling. When Wendy succeeds in re-attaching his shadow to him, Peter takes a fancy to her and invites her to Neverland to be a mother to his gang of Lost Boys, the children who are lost in Kensington Gardens. Wendy agrees, and her brothers John and Michael go along. The dangerous and magical flight to Neverland is followed by many adventures.

COME AWAY, COME AWAY!

THE HOME UNDER THE GROUND

THE CHILDREN ARE CARRIED OFF

DO YOU BELIEVE IN FAIRIES?

"HOOK OR ME THIS TIME"

WHEN WENDY GREW UP

this version isby fat the best

The readers in this version are clear and do not speed through the text.

Better than the other peter pan books, readers are piety clear and don't read too quickly.

So much better than the other versions!!

I have no complaints with the way it was read, excellent reading. Just a warning for any other listeners though. It's predominantly females reading. I personally listen while at a loud working job and have trouble hearing higher pitched voices, so I thought I'd put that out there.

My first time "reading" this book and I find it as fascinating and tragic as its main character. Well worth the listen for those who dare not grow up!

The reader in the first couple of chapters speeds through the lines way too fast, all other readers did a great job though!

this story is adorable! and so well read!

I only managed 10 minutes of this version of the book due to the 1st reader. Oh my goodness, take a breath please! She reads so fast, every paragraph is literally churned out in one swoop. There is no feeling of emotions as she reads and the listener isn't given enough time to process what has been said. Very monotone.