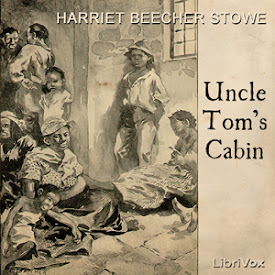 Among the most “banned” books in the United States, Uncle Tom’s Cabin; or, Life Among the Lowly is a novel by American author Harriet Beecher Stowe which treats slavery as a central theme. Stowe was a Connecticut-born teacher at the Hartford Female Academy and an active abolitionist. The novel is believed to have had a profound effect on the North’s view of slavery. In fact, when he met Harriet Beecher Stowe, President Lincoln is said to have commented, “So you’re the little lady whose book started the Civil War.” First published on March 20, 1852, the story focuses on the tale of Uncle Tom, a long-suffering black slave, the central character around whose life the other characters—both fellow slaves and slave owners—revolve. The novel depicts the harsh reality of slavery while also showing that Christian love and faith can overcome even something as evil as enslavement of fellow human beings. (summary by Wikipedia and John Greenman)

Note From the Reader: The listener is about to enter a world rich with diverse characters. In order to differentiate between the characters, the reader has given each, his/her own voice. As an adult male reader, however, the reader's representation of women and children will, necessarily be less than adequate. He asks for your indulgence. (18 hr 6 min)

Superb Reading of an Important Classic

This important book gives a small glimpse of the history of America during slavery. However, rather than an clear presentation of the facts, it’s importance comes from the moral questions it raised. The narrator if this edition is fabulous - very clear with proper emotional affect. I highly recommend THIS version for its wonderful narrator.

Harriet is an amazing writer. This book so well gives you a look at what slavery was like. Uncle Tom's faith is truly Inspiring and it's a shame his name is now slandered out of context. Everyone needs to read this book! The reader was very talented as well didn't take anything away from this story.

I rated this 5 stars for the reader/performer, who is truly excellent. Completely professional performance that breathed more life into this rather tedious book than I’d ever thought possible...highest standard I’ve encountered on LIbriVox so far. As for the book itself, it’s a bit of a mixed bag...I’m not even sure that the word ‘novel’ sums it up....it varies between novel, sermon and propaganda (albeit well argued and of course moral!). There are some quite effective scenes from a literary perspective but these occur mostly at the start of the novel. The hardest parts to wade through are the extended debates on Christianity and the soul, though I guess we have to appreciate the importance of these discussions to people at that time. As a modern reader, one thing this novel actually provoked me to consider was that novels written for the purpose of political or societal change are generally poor novels, however just their cause. The recent novel ‘When everything sounds like the movies’ springs to mind...great ‘cause’, very poor novel. There are of course great novels that provoke us to consider social issues (Of Mice and Men, etc), but they do so more effectively because of their primary focus on the quality of the story. Once more, though, I want to praise the reader of this text...incredible stuff.

I am slightly disappointed that I've been on this Earth for 30 years and have just now read Uncle Tom's Cabin. My dad had told me about it when I was younger and it had always been on my ever growing list of books to read. Within minutes of listening I was sucked in. I am absolutely in awe of everything I've experienced emotionally upon finishing this book. I wish it had been required reading in high school. The writing, the weaving of the story, the characters. My heart is so full and yet breaking at the same time. I am so thankful to the narrator for donating his time and effort to bring this incredible piece of literature to life. I highly recommend giving this a read and or listen.

I am so grateful to have been able to listen to this book. It took a few months for me to be able to work though it and absorb the material, but I am the better for it. Both expected and unexpected, we journey long and hard with Tom and those who are close to him, conscious of the authors choices of characters to portray the many sides of slavery, yet transfixed by the story itself. Thank you for taking the time to record this and for honoring this brave work and the lives of those people whom the pages were based on.

Not at all what I expected - which was something preachy and well intentioned but not a very interesting story. But while you might call it preachy it's a rousing good story on top of its moral argument. Which is why it has been a banned book. A tale well told with an underlying moral rectitude and argument against slavery was a powerful weapon against that great national evil. And it has power and a message for us today as well.

This was a powerful piece of literature that really captures the brutality and hopelessness of American slavery. You really get invested in thr characters and feel what they feel. Also the reader in this audiobook is very well spoken and speaks with emotion and different vocal inflection for different characters

excerptly narrated, easy to jump in and feel each character. you think you understand our countries past mistakes, you don't. you can't. Beautiful. Every human should read this and it may help us all