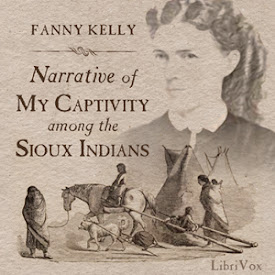 Narrative of My Captivity Among the Sioux Indians

"Narrative of my captivity among the Sioux Indians: with a brief account of General Sully's Indian expedition in 1864, bearing upon events occurring in my captivity"

"I was a member of a small company of emigrants, who were attacked by an overwhelming force of hostile Sioux, which resulted in the death of a large proportion of the party, in my own capture, and a horrible captivity of five months' duration. Of my thrilling adventures and experience during this season of terror and privation, I propose to give a plain, unvarnished narrative, hoping the reader will be more interested in facts concerning the habits, manners, and customs of the Indians, and their treatment of prisoners, than in theoretical speculations and fine-wrought sentences." (Summary from Introduction) (6 hr 37 min)

01 - Early History; Canada to Kansas; Death of My Father; My Marriage; 'Ho, For…

02 - The Attack and the Capture

03 - My Husband's Escape; Burial of the Dead; Arrival of the Survivors at Deer …

04 - Beginning of My Captivity

06 - Continuation of our March into the Wilderness; Suffering from Thirst and W…

07 - Powder River; Another Attempt to Escape; Detection and Despair; A Quarrel;…

08 - The Storm; Arrival at the Indian Village; The Old Chief's Wife; Some Kindn…

09 - Preparations for Battle; An Indian Village on the Move; Scalp Dance; A Hor…

10 - Mourning for the Slain; Threatened with Death at the Fiery Stake; Saved by…

12 - First Intimation of My Little Mary's Fate; Despair and Delirium; A Shower …

13 - Arrival of 'Porcupine'; A Letter from Captain Marshall; Hopes of Rescue; T…

17 - A Prairie on Fire; Scenes of Terror

18 - Last Days with the Ogalalla Sioux; Massacre of a Party Returning from Idah…

20 - An Indian Tradition; Arrival at the Blackfeet Village; An Offer to Purchas…

21 - Appearance of Jumping Bear; I Prevail on Him to Carry a Letter to the Fort…

24 - What Occurred at Fort Laramie After My Capture; Efforts to Rescue; Lieuten…

25 - Supper in Honor of Our Reunion; Departure from Fort Sully; Incidents by th…

27 - Move to Wyoming; False Friends; The Manuscript of My Narrative Taken by An…

Absolutely fascinating! Two cultures on two different paths. Nice to see another side of the story. Fanny had been to hell and back, what a wonderfully strong cool headed woman! Wonder Woman the FANNY KELLY clan. This was my first audio book and the lady who read this (you have a kind voice than you) may not have been a native English speaker and English may be her second language, therefore CUT HER SOME SLACK. The best is it's free!

Narrative of My Captivity Among the Sioux Indians

It's a captivating story . "No pun intended". The narrative is not long or drawn out but, gets right to the point of her experiences, emotions and decisions during such a tumultuous time.

I was interested to hear of Fanny Kelly's experiences but I did not enjoy the narrator, who's cadence was irritating. Increasing the playback speed helped overcome her emphasis on the last word of every sentence.

By far the worst narrator of a book I have ever listen to. I have listened to hundreds of narrated books. TriciaG and her reading style is as if she is a newscaster with no understanding of how to articulate reading a book. The subject matter was extremely interesting however, the narrators obscene delivery made the book intolerable. What a shame. I understand that TriciaG may be a great volunteer, however, great volunteer should be judged by the success of one's efforts not the enthusiasm of one's efforts.

This is a fascinating narrative, gripping and well written. Amazing book and thank you to the reader for bringing it to us. I do have to comment on the readers odd stilted style though, the strange inflection and flat emotionless narration made this a struggle to get in to initially, however I would urge listeners to persevere because the story is well worth it!

I enjoyed listening to this book.

Quite frankly I at first, I thought that I would not like the voice of the reader. But after a few minutes I found that the readers voice was soothing. I hope to listen to more books that TricaG reads in the future.

This LibriVox volunteer's reading is grossly inappropriate for the subject matter of Mrs. Kelly's book and I am so thoroughly disgusted I've begun the arduous process of volunteer reading the book myself.

This is an outstanding piece of literature. The book will take you deep inside the life of Ms Kelly as she struggles with captivity, loss and the return to her people. The reader did an ok job but don’t think she’s a native speaker and as a result some of it suffers. The material carries it though and if you can tolerate the reading it’s worth it for sure.