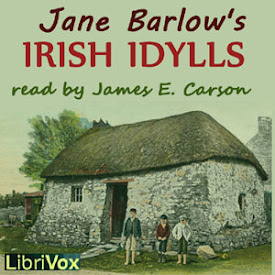 Irish Idylls is a collection of short stories about Irish peasantry during the 19th Century. Ms Jane Barlow, an Irish lass, having, unbelievably, an uncertain date of birth, has a turn of phrase that delights and simultaneously enmeshes the reader/listener with compassion for her tableau. She captures the tune and lilt of dialogue so delightfully. A tiny sample: "So, by hook or by crook, Lisconnel holds together from year to year, with no particular prospect of changes; though it would be safe enough to prophesy that should any occur, they will tend towards the falling in of derelict roofs, and the growth of weeds round deserted hearthstones and crumbling walls." Although of high social standing, I suspect she might have been a “left-footer” but maybe not, her sympathies lying so dramatically with local Irish peasants of her acquaintance. She portrays a decided antipathy toward English rule/subjection of these peasants along with a rather stark anti-clerical and anti-religious leaning, which I find somewhat unusual for the time. But there it is at the end of the day. This book, Irish Idylls, published in 1893, was perhaps her greatest success and was followed by a sequel Strangers at Lisconnel in 1895, which, God willing, we may also get to in due course. I do hope I get a chance to sing an Irish ballad somewhere herein. (Summary by JCarson) (8 hr 34 min)

Good story, your typical hard luck, down and out kind of story. Not as grim as some of the Irish stories I have listened to, thankfully. The reader was too slow and he paused at peculiar times in the a sentence, making him hard to follow. Speeding things up improved the audio immensely. I had never used the ‘rabbit’ feature, works great. I would have rated it higher if the reader knew his text better.