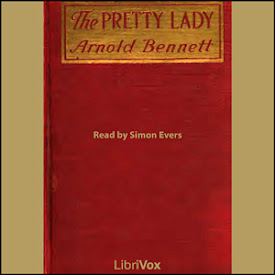 ‘The Pretty Lady’ is considered to be one of Bennett's most revealing and under-rated works. It is the story of a French prostitute, Christine, who has escaped from wartime Ostend, and set herself up in business in London. Though a refugee, she demands no pity; she is self-sufficient, practical and realistic. Christine is not a harpy preying on innocent soldiers, but a canny businesswoman, doing the best she can with the opportunities life has given her. Her main relationship is with G.J. Hoape, a wealthy man above the military age. Bennett in this novel presents a disturbing image of wartime society, fragmented, uneasy and divided. There are references to industrial unrest and to social injustices, and hints that the British press is less than frank about the war. (Summary by Simon Evers) (8 hr 9 min)

...into the past and a study of character. Exquisitely read by Simon Evers. Each character has been defined so very well and I highly recommend it.

as always great reader. story a little sombre but that shows wa

is a stark picture of war and life

Should be read along side Vile Bodies by Evelyn Waugh.

Sometiimes the best ending is no ending.

Listened to the entire book twice to make sure I wasn’t overreacting. This seems to be highly rated as a commentary of the times but Bennett’s penchant for over-wordiness and the privileged, male superiority attitude that pervades the work also ruins it. Nevertheless Simon Evers shines, as usual. Two stars are for his rendition.

Happy to meet you, Arnold

Wasn't aware of Arnold Bennett at all, even though he seems to be well known in the UK, and has an omelet name after him, a very high honor. The reader interprets very well. It takes a Brit to properly read a Brit. Well done!

A very unsatisfying story, and kind of weird. I love the stories of Arnold Bennett, but couldn’t appreciate this one. Maybe someone with more philosophical acumen can derive a message from it, but it was lost on me.

Simon Ever's reading of this fascinating work is up to his usual A+ performance. The book itself is amazing. Think Arnold Bennett's work is way ahead of its time in terms of emotional honesty.