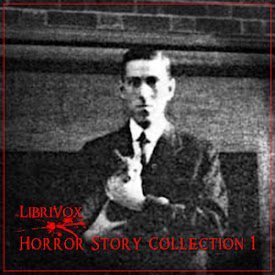 An occasional collection of 10 horror stories by various readers. We aim to unsettle you a little, to cut through the pink cushion of illusion that shields you from the horrible realities of life. Here are the walking dead, the fetid pools of slime, the howls in the night that you thought you had confined to your more unpleasant dreams. (3 hr 51 min)

The Beast With Five Fingers

The Doom That Came To Sarnath

The Mark of the Beast

The Mother and the Dead Child

some good stories excellent natation by all readers

Was pretty good, but Mr. Glen Hallstrom however is absolutely great.

a couple spooky ones but all have great prose

I loved these! Have heard the mark of the beast in a different way. But it's still a good story and one of the best. Listen to them. They are good!

If you should yourself say that using five words would be more palatable and enjoyable to the ear than using every word contained in the dictionary, then I should say you are being absurd. You've clearly not realized the power in these words, for while using few words may appear to be a solid concept, in actuality... it falls far short of the lofty and distant goal you have yourself set for it. Such as this sentence I've constructed (don't worry, I won't spoil a story for you by using a sentence from it, this is entirely my brainchild): "For in the end, 'twas shown clearly that those who may once have been pure are now corrupt, and those who were corrupt have become entrenched in the vile mud that is their own evil, their lust for wealth and power, magnified by many degrees, and they themselves are left barely human, brainless beasts of blood and violence, all their human nature lost and sent out in the wilderness that is human ignorance, human selfishness and want, left to fend for its own nature, corrupted and left behind, in a world where the wonderful purity that is in the very soul of us humans is dying out, where the abandoned nature has no hope to survive, for it is a sheep among wolves, and a sheep that is old and weakened by the powers of time, ready for the slaughterhouse, and denied even the mercy that should be granted unto it, the mercy of death, a death that should be merciful when the sorry life of the sheep is considered..." sure, it's wordy, but compare it to this: "And in the end the good people were actually evil." Pretty easy to pick a winner here, isn't it? So ends my argument, without giving a single shred of an opinion on this book, but nay, I cannot, for I have made this review long enough already with the inclusion of the sentence that I myself wrote, grew from its infancy as a wand'ring thought in the vastness that is the human mind...

Mr. Glen was one of the best readers I've ever encountered, but don't think I didn't enjoy all of the others. All of them were simply superb. Even the reader who read the last H.P. Lovecraft one, whose voice grew on me as if it was a bunch of infectious vines. Simply fantastic.

My first and fast favourite.

My first Librivox experience and I keep coming back to it still. Author and reader combinations are just perfect.

Not a big compilation, and the audio quality is all over the place.