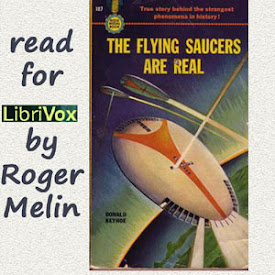 The Flying Saucers are Real

The Flying Saucers are Real is a book that investigates numerous encounters between USAF fighters, personnel, and other aircraft, and UFOs between 1947 and 1950. Keyhoe contended that the Air Force was actively investigating these cases of close encounter, with a policy of concealing their existence from the public until 1949. He stated that this policy was then replaced by one of cautious, progressive revelation. Keyhoe further stated that Earth had been visited by extraterrestrials for two centuries, with the frequency of these visits increasing sharply after the first atomic weapon test in 1945. Citing anecdotal evidence, he intimated the Air Force may have attained and adapted some aspect of the alien technology: its method of propulsion and perhaps its source of power. He believed the Air Force or the US Government would eventually reveal these technologies to the public when the Soviet Union was no longer a threat.

Donald E. Keyhoe, who relates here his investigation of the flying saucers, writes with twenty-five years of experience in observing aeronautical developments. He is a graduate of the U.S. Naval Academy at Annapolis. He flew in active service with the Marine Corps, managed the tour of the historic plane in which Bennett and Byrd made their North Pole flight, was aide to Charles Lindbergh after the famous Paris flight, and was chief of information for the Aeronautics Branch, Department of Commerce. (Summary by Wikipedia and book preface) (7 hr 25 min)

This is a reminder that we've always known how to employ Investigative Reporters. Today, however, they are full of vitriol & huborus, with such blatant bias, one cannot trust what is published. Enjoyed this, throw back to a time of greater integrity, though less technological advancement.

The Flying Saucers are Real

Fascinating how government continues to deny even in 21st century

My first book in this genre and I found it very good well read by Roger Melin. If you like reading and hearing about UFO's and other life forms that may be out there watching us, or what other countries were or were not building this probably will interest you. I really enjoyed it very much,and was amazed by some of the information.Thanks for a very good reading Roger! Enjoy

Aliens are real and they are being oppressed by the white male patriarchy. We need to let the aliens invade our world, enslave us and steal out resources. They idea that we are not doing enough to provide for our alien conquers strikes me as raycyst. Give an alien your job, your spouse and children, your house, and your life. Unless we bow down before out alien invaders we are raycyst. don't be raycyst. Only correct thinking anti-raycysts will be allowed to participate in the future tightly controlled corporate world.

With all of the talk and theories and probability of a Deep State, it's fascinating to hear from one of the investigators who tried to blow the story as the Shadow Government was theoretically being formed.

the saucers are real are really good.

An cracking "read" and very well read br Roger Melin. Most of the tacts in the book seem to stack up which just adds to the intrigue.

This is one of the best books I've ever listened to from Librivox. The reader (Roger) is great. This is definitely well read.