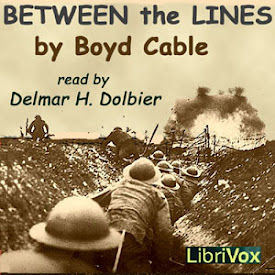 This book, all of which has been written at the Front within sound of the German guns and for the most part within shell and rifle range, is an attempt to tell something of the manner of struggle that has gone on for months between the lines along the Western Front, and more especially of what lies behind and goes to the making of those curt and vague terms in the war communiqués. I think that our people at Home will be glad to know more, and ought to know more, of what these bald phrases may actually signify, when, in the other sense, we read 'between the lines.' (Summary by Boyd Cable) (5 hr 51 min)

The Promise of Spring

A Convert to Conscription

A Hymn of Hate

Reader was excellent yet sometimes difficult to understand

One of the great things about LibriVox is that it enables a talented reader to engage with a book and give a truly individual performance that brings the text alive and does honour to it. Delmar H Dolbier is one such reader and I salute him. He has the vocal polish and assured delivery of a professional, but the wholehearted commitment of an amateur in the best sense. This is no mediocre, measured account that 'lets the words speak for themselves' - what a daft meaningless phrase, forsooth! His is a full-throated realisation of a text that documents the blood and guts of human experience. Again bravo!

The author has written a great book, the narrator has put 100% of effort into it. For me though I think I would have preferred it if he had used his own voice and accent, I would have been able to concentrate more on the actual story. But by saying that I do not wish to take away any credit to him for his great performance.

An American over exaggerating all the British accents he made the men sound like street urchins in a Charles Dickens play, pretty unbearable, another good book rendered useless..ps there are lots of extremely good American readers but not in this case

The reader was awesome! Fantastic job putting life to the words and voices to the names. Very well done, wishing I could give 6 stars!

Well read and covers many aspects and angles of WW1