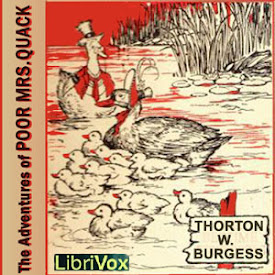 The Adventures of Poor Mrs. Quack

"Hello, Jerry Muskrat! We'd forgotten all about you," said Mrs. Quack. "What was that you said?" Jerry good-naturedly repeated what he had said. Mrs. Quack's face brightened. "Do you really mean it?" she asked eagerly. "Do you really mean that you know of a pond where we could live and not be likely to be seen by these two-legged creatures called men?" "That's what I said," replied Jerry briefly. "Oh, Jerry, you're not joking, are you? Tell me you're not joking," begged Mrs. Quack. "Of course I'm not joking," returned Jerry just a little bit indignantly, "I am not the kind of a fellow to joke people who are in such trouble as you and Mr. Quack seem to be in." (Summary by Burgess) (1 hr 49 min)

I liked it although there's a few sad parts

thank you for for the reading

My least favorite Burgess book. Must have said "kill" and "terrible guns" 100 times. Not the best for little ears. No problems w the readers.

I like the book because it is very close to what used to happen.

the reader for chapter 3 wasn't very good, otherwise it was okay