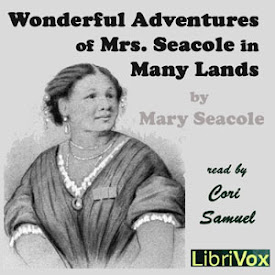 Wonderful Adventures of Mrs. Seacole in Many Lands

I should have thought that no preface would have been required to introduce Mrs. Seacole to the British public, or to recommend a book which must, from the circumstances in which the subject of it was placed, be unique in literature. If singleness of heart, true charity, and Christian works; if trials and sufferings, dangers and perils, encountered boldly by a helpless woman on her errand of mercy in the camp and in the battle-field, can excite sympathy or move curiosity, Mary Seacole will have many friends and many readers. She is no Anna Comnena, who presents us with a verbose history, but a plain truth-speaking woman, who has lived an adventurous life amid scenes which have never yet found a historian among the actors on the stage where they passed. I have witnessed her devotion and her courage; I have already borne testimony to her services to all who needed them. She is the first who has redeemed the name of “sutler” from the suspicion of worthlessness, mercenary baseness, and plunder; and I trust that England will not forget one who nursed her sick, who sought out her wounded to aid and succour them, and who performed the last offices for some of her illustrious dead. (Summary from the Preface by W. H. Russell) (5 hr 57 min)

WHAT A WOMAN, THE SOUL OF AN ANGEL

WOW. I LOVED THIS BOOK FROM BEGINNING TO END. SUCH A BRAVE SOUL, TO HAVE GIVEN OF HERSELF UNSELFISHLY. I HAVE READ MANY WAR STORIES, SUCH BRAVERY, CRUELTY AND SADNESS. IF READ BY MORE PEOPLE WOULD SURELY TURN THEM FROM WAR FOREVER. I HAD MOSTLY JUST READ OF WORLD WAR 1 BUT WILL NOW READ FURTHER AS I HAVE JUST ABOUT EXHAUSTED THE WORLD WAR 1 BOOKS. MY HEART GOES OUT TO ANY SERVICEMAN ANYWHERE FOR WHAT THEY HAVE AND WILL ENDURE.

This novel reveals the heart of a nurse and true servant of mankind. Would that I could be half the woman to the hurting in my generation. Also,a look at another time in the history of our world from an eye witness off it. Well worth hearing!

wonderful adventures of Mrs. SeaCole in many lands.

i liked the realism of this story. some parts dragged, but the getting the full message is worth completing the story.

Most excellent review of history. Reader make listening a pleasure.