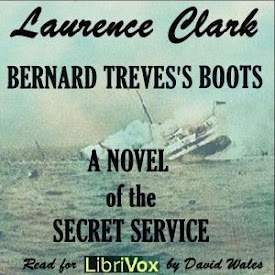 Bernard Treves's Boots; A Novel Of The Secret Service

What has Manton gotten himself into? His impersonation has broader implications -- and more dangerous ones -- than he had imagined. (Summary by David Wales) (10 hr 8 min)

opportunity opens up when a man goes to sign up for the military. His goal was to earn money to pay back that which was stolen previously under his watch. The recruiter would like him to the place of an officer with a few problems like drugges, cowardness, and possible associations with German spies. How could he possibly say no to that adventure.....

This book provides an exciting adventure story during "The Great War," along with a glimpse of English upper class attitudes and mores, at least insofar as they could be expressed in genteel post-Victorian literature. Key characters are a bit too one-dimensional for modern tastes with great emphasis on individuals' bearing and tasteful dress, but the essential story moves along quickly toward a nicely conceived resolution. All in all, an entertaining way to spend a few hours.

This story is a mix of intrigue and suspense coupled with the impersonation of a weak-minded man by a strong-minded one. There's plenty of anti-German sentiment (this is set in WWI and is typical sentiment of the time), but the story itself is good. Thanks for reading this, David!

I throughly enjoyed the book. some Amazon reviews were not so good, but I suspect they are used to faster moving novels that are more bloody and sensual. good book for the era written.

This book surprised me. I didn't expect it to be such a page turner. I really enjoyed it and would recommend it to anyone.

A well written novel and excellently read. It is thought provoking and and thrilling. I couldn't stop listening!