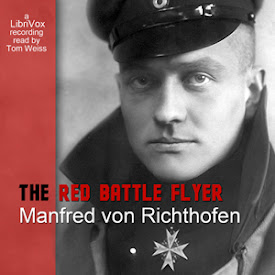 Manfred Albrecht Freiherr von Richthofen (2 May 1892 – 21 April 1918), also widely known as the Red Baron, was a German fighter pilot with the Imperial German Army Air Service (Luftstreitkräfte) during World War I. He is considered the top ace of that war, being officially credited with 80 air combat victories.

Originally a cavalryman, Richthofen transferred to the Air Service in 1915, becoming one of the first members of Jasta 2 in 1916. He quickly distinguished himself as a fighter pilot, and during 1917 became leader of Jasta 11 and then the larger unit Jagdgeschwader 1 (better known as the "Flying Circus"). By 1918, he was regarded as a national hero in Germany, and was very well known by the other side.

Richthofen was shot down and killed near Amiens on 21 April 1918. There has been considerable discussion and debate regarding aspects of his career, especially the circumstances of his death. He remains perhaps the most widely known fighter pilot of all time. This recording is a short autobiography of Manfred von Richthofen. For information, the Ordre Pour le Mérite, was also known by the flyers as The Blue Max. (Summary by Wikipedia and Tom Weiss) (3 hr 47 min)

An interesting little book, demonstrating what eccentrics aviators were during the period. War is basically a game for these people, who see themselves as modern knights. There’s a fair bit of “killing an Englishman before breakfast”. I most enjoyed an English prisoner revealing that the Allies thought the Red Baron’s distinctive plane was flown by a woman, because it’s too narrow for a man. The Englishman is saddened that Richthofen really isn’t the alluring and lethal figure that is developing in the minds of his messmates. That’s some comic book brilliance right there. There’s a piece at the end where Richthofen indulges in pointless animal cruelty, which might be quite confronting for some readers. He is thrilled to be given the right to kill one of the last remaining European bison, and lets the reader know what a great honour it is to be allowed to slaughter an animal so clearly headed for extinction. The method of killing, repeated blasts of a shotgun, lacks any of the layers of gentility or skill that hunters usually use to describe their sports. Those offended by violence toward animals may wish to avoid this chapter. Recommended for aficionados of war stories, people interested in the history of aviation, and those wanting to listen to the inner thoughts of a man feted for his ability to kill. As a caveat that in later life Richthofen declaimed the attitudes in the book as youthful indiscretions, and the Allies thought it was put together as a propaganda piece.

Fun and games in the aeroplane in the war that was billed as the war to end all wars, war for peace and freedom and democracy and mom and apple pie, all to fool the canon fodder. Fun dog fights in the air and the loser dies. The Red Baron himself was killed in the air at the age of 25 in 1918. War killed the best. War is a racket. TF - The English thought that a woman was flying his plane, not because it was narrow, but because they didn't think that a man would be flying in such a a gaily painted machine. The Red Baron and his Flying Circus disdained camouflage! Very well read!

Richtoven was a great person

Sure he fought the British, but his strongest fight was against Patriarchy. It is well know that the red Barron was a nonbinary person from the great country of Germania, well known for progressive politics. In one of his latter battles he finished of a European Bison that was practicing heteronormative oppression of female bisons. he was a great perdon

The Red Baron is probably one of the most well known aviators, so it was nice to learn more about the man behind the legend. Some parts painted a little to rosey of picture of him. Educational from a historical perspective. If you like avaition or World War I, give it a listen.

A good story and an entertaining listen, but talk about German propaganda. if everything he wrote was true then there wouldn't have been an allied plane left in the sky, all taken out by him and his brother. You wouldn't call him a humble man. but as I say entertaining.

He was in the midst of it. Excellent reading but recording sometimes denoising overdone or so perhaps. All in all very exciting and interesting.

Another well read book by Tom. A good book that has a good preface that puts it's eccentricities into perspective.

apparently this is heavily censored for propaganda purposes interesting from that angle... dinnertime thought this thinking ideal