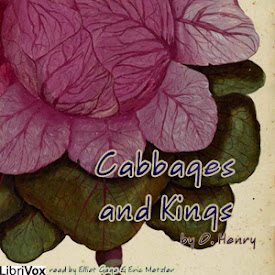 This work is O. Henry's first published volume and is considered to be his only novel. The plot is composed of several short stories, which were inspired by the author's six-month stay in Honduras in the late 1890s.

"The incidents embracing as they do, a variety of subjects, hang loosely together, so loosely in fact, that at times one finds no apparent connection between them at all, and yet in the end one sees how each is intimately related to the other. ...Written by a less able hand than O. Henry's the book might have been a sad jumble, perhaps comprehensible to none but the Walrus--but as it is, one finds a joy in its every obscurity." -- The New York Times Book Review, Dec. 17, 1904)

Great mysteries are ofen meta-mysteries. For over a century this novel has masqueraded as a collection of loosely connected short stories. Looking backwards through a prism (now a commonplace critical contortion) Cabbages and Kings foreshadows many shadings: "At Swim-Two-Birds", "Pierre Menard, Author of the Quixote", "Tyrants Destroyed", "The Continuity of Parks". -- Elliot Gage

O. Henry spent his first years as a writer in Austin, Texas, and the University of Texas maintains a 219-item collection of his works at the Portal to Texas History (reference to publicly-available items which may not be in public domain offered to enthusiasts). — Eric W. Metzler (6 hr 25 min)

THE PROEM: BY THE CARPENTER

THE LOTUS AND THE BOTTLE

THE PHONOGRAPH AND THE GRAFT

THE SHAMROCK AND THE PALM

THE REMNANTS OF THE CODE