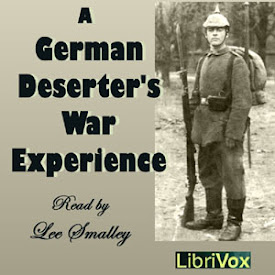 The author of this 1917 narrative, who escaped from Germany and military service after 14 months of fighting in France, did not wish to have his name made public, fearing reprisals against his relatives. The vivid description of the life of a common German soldier during “The Great War” aroused much interest when it was published in the United States in serial form. Here was a warrior against his will, a hater of militarism for whom there was no romance in war, but only butchery and brutality, grime and vermin, inhuman toil and degradation. His story also contains the first German description of the retreat of the Teutonic armies after the battle of the Marne. – From the Translator’s Preface
- Summary by Lee Smalley (5 hr 20 min)

The Horrors of Street Fighting

Nearly Buried Alive on the Battlefield

Soldiers Shooting Their Own Officers

Marching to the Battle of the Marne—Into the Trap

At the Marne—In the Maw of Death

The Rout of the Marne

The Flight from the Marne

At the End of the Flight

The Beginning of Trench Warfare

Friendly Relations with the Enemy

Christmas in the Trenches

The "Itch" A Savior

In the Hell of Vauquois

The Flight to Holland

Anyone considering joining militart service, even in peace times, should read this book! Anyone who had family in world war 1 should read this book! just amazing. he may not be an actual writer, but he did a wonderful job of describing the horros encountered in his military service. my grandfather was in that war, the year this man fled. He never spoke much about the war, other than to say it was a terrible thing. He was injured & left on the battlefield to be picked up by enemy troops later. with that in mind, reading what happened in german trenches & battlefields - it just took my breath away that my grandfather survived. this soldiers account just brings history alive better than any history book we studied in school.

I don't agree with the political view of the writer but none the less the book was excellent the war descriptions are certainly a reality check. and The narrator's Voice and inflections were excellent

Excellent first hand telling of the famous CHRISTMAS TRUCE. I would have given it 5 stars except for the pro-communist propaganda at the end.

Do you secretly wonder if there is a human subtype without much humanity to it? Have you ever contemplated whether german soldiers were worse people than allied soldiers? This book helps heal that kind of war wound. In fact, the protagonist here may be up against more than in any other book you can think of, and we are talking Nonfiction, baby. His predicament: objecting to war, you are forced to be a soldier. Your country is the aggressor and you will be asked to murder children to increase its glory, do it now or die, no argument in this hell. Or escape, as does our anonymous hero! His story reminds that of course the german soldiers are Homo sap just like the rest of us. This makes it even more surprising that there isn't more german content in all the war memoirs & literature. but maybe the second war really did finally get the Hun out? Terrible pun. I can understand the They were the aggressors. Wldnt that tend to inhibit german writers ? Or maybe they just didnt want to hear about war anymore

This is a frank and shocking description of the what war is. A friend who was in Vietnam once told me that if he made a realistic movie of it, the theater would be empty in minutes. This book provides that kind of picture, but in writing. This is hugely valuable to provide a picture of what mass slaughter really is. It also challenges an English reader who can’t help but feel the humanity of all the men drawn into the madness of war.

This might be the very best eye witness report there is about WW I trenches. It is incredibly honest. Interesting how we are all touched by this very deeply and how his final words are about abolishing the ruling capitalistic classes who use war for their own materialistic goals. If you liked this book you might enjoy 'Heeresbericht' by Edlef Koeppen. There is an excellent audiobook by audible available. (in German language). I also thought the reader did an excellent job! Thanks so much.

A look from a different viewpoint

I've read many things about WWI, including Remarque's novel, but this soldier, labeled as anonymous, truly takes us to a ground level view of the first year of the war up until his desertion. Anon takes us through Belgium into France, through the Battle of the Marne, the retreat and into trench warfare. His view is as one sickened by the war and the atrocities until finally he's had enough. Sherman said "war is all hell"; anonymous confirms it.

A heartbreaking and gripping truth of War.

Where do I begin? The account of events written by this anonymous sapper is, by far, the most immersive story of the Great War that I've heard. It paints the butchery of the reasonless war in a very vivid crimson. As for the narration, I found the reader portrayed the emotion of the events very well with a sense of a soldier recollecting his events. Very powerful book.