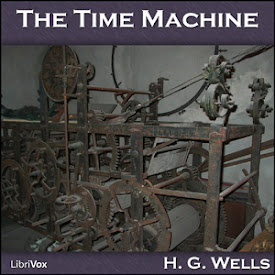 The Time Machine is a novel by H. G. Wells, first published in 1895, later made into two films of the same title. This novel is generally credited with the popularization of the concept of time travel using a vehicle that allows an operator to travel purposefully and selectively. (Summary from wikipedia.org)

Note: This audiobook contains readings of chapter 1 by two different readers. Variety is the spice of life. (4 hr 9 min)

Ignore the other review

Confused by the bad reviews, first of all on my download there was only one reader and not other readers like some have claimed and I thought he was decent. I thought he had a warm un imposing voice, it can be irritating if a narrator is to imposing.. The book on Atlanis has a reader who sounds like he is trying to cast a spell which drove me crazy but can't say I have an issue with this guy's voice.

The story is definitely enrapturing! Anyway it's very tough to get through chapters 2, 3 and 4 because the reader adds random pauses here and there giving away your chances to get the whole sentence. It's possible to endure that for a chapter or two, but you'd miss a lot of sentences and meanings and it'd be more of a sport game than the joy of listening to an audiobook. It's like reading without any respect for punctuation whatsoever. He starts good enough for the first few minutes then wander away to his own random pauses style. Luckily there's an alternative gutenberg.org version here http://www.gutenberg.org/files/17401/17401-readme.htm You can fetch those few chapters from there and then move on with listening to the other librivox chapters which are very well read! If you think I'm just being a complainer just listen to the whole Chapter 04, if you can make it, well you have strong willpower and you may want to join the reading decryption tournament next season.

I honestly don’t see the problems that the other reviewers seem to harp on so eagerly. Sure, the reader for chapters 2-4 isn’t the greatest, but he wasn’t terrible either. I do admit the other readers were slightly easier to listen to, however. The story is, of course, a classic. Probably best for ages 11+, you would want to ensure that you aren’t easily scared before listening. it’s not a horror story, but it’s still slightly intense in some parts. Last thing: Do not listen to the end until you’ve heard the rest. If you’re one of those people who enjoys skipping to the end of books, try to resist the impulse here. This book works far better if you don’t skip (Although I do understand why you might feel like skipping chapters 2-4).

Could have been worse

Like everyone else mentioned, the reader for chapters 2-4 does have a very distracting voice. If you can make it pass his mother yelling in the background that "dinner is ready" the rest of the readers are not half as bad. Except maybe the second to last, that sounded like Napoleon Dynamite's brother Kip. Two and a half stars for beautiful story but crappy production.

TBOL3 is a horrendous reader. There is no way in hell I could possible sit through even one chapter read by that kid, let alone four. If you think I’m being hyperbolic, just go listen to one of his recordings. I am tempted to buy this book and a proper mic so that I can record those 4 chapters and offer something not as tragic as that.

The kid reading Chapters 1, 2, and 3, TBOL3, should not be reading audiobooks aloud for the public. However well-intentioned his effort was, at contributing to the Libravox audiobook project -- his very poor reading-aloud skills detracted from what should have been, a very enjoyable book.

some of the words he was reading, and mid pronounced them. I had a decent reader for chapter one, then got the squeaky teen for the next four chapters. he was so bad I gave up.