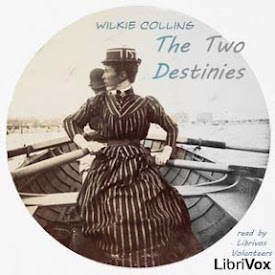 Mary Dermody is destined to be together with George Germaine one day, or so at least her grandmother prophesies. Destiny at first doesn't seem to adhere to this plan, and the pair is separated and lose sight of each other. But when George saves a young woman from drowning, a strong connection seems to develop between them, which seems to be almost supernatural.. - Summary by Carolin (10 hr 9 min)

Chapter III - Swedenborg and the Sibyl

Chapter VII - The Woman on the Bridge

Chapter XI - The Letter of Introduction

Chapter XIII - Not Cured Yet

Chapter XV - The Obstacle Beats Me

Chapter XXI - She Comes Between Us

Chapter XXII - She Claims Me Again

Chapter XXIV - In the Shadow of St. Paul's

Chapter XXV - I Keep my Appointment

Chapter XXVI - Conversation with my Mother

Chapter XXIX - Our Destinies Part Us

Chapter XXXIII - A Vision of the Night

Chapter XXXIV - By Land and Sea

Chapter XXXV - Under the Window

The Wife Writes, and Closes the Story

'The Moonstone' and 'The Woman in White' long ago put Wilkie Collins in the top league of authors for me. Sadly, only this recollection persuaded me to persevere with this particular book, and I did so out of a sense of loyalty towards WC, heaving a big sigh of relief when it was over. I have some sympathy with what others have said about some unfortunate parts of the narration, but I don't think the most stylistically perfect rendition would have redeemed this particular work of fiction for me. Even so, the Librivox volunteers do a great job in general and I'm grateful to them all for giving their time and energies so unstintingly for our pleasure.

Enjoyed the reading and the story very much

There are elements in this novel that one finds in much of Wilkie Collins: is fate absolutely inescapable? how do parallels echo -- in fate, identity, beliefs -- and then present their opposites? Some of the extremes come across as high camp (the scene in which the protagonist wrestles with himself and his intention to drown the woman who spurned him...) -- Excellent readings by very entertaining readers. I especially liked beyondutopia (Susan Smith Nash), who was not afraid to go for the camp, the melodrama, the (at times) grotesque... loved it!

This is yet another great take of suspense and romance artfully arranged by the prolific Wilkie Collins. Mr. Collins gives away the end in the beginning, yet that some how compels one to continue to read on. Susan Nash Smith nearly ruined this drama by making it overly dramatic. Her attempt to give each character a different sound is disasterours. I nearly quit listening several times, but the plot drew me on. A weaker book would have been crushed by the horrible narration. Please redo this book with a better narrator, it is worthy of it.

This is a good story. Most of the readers did very well. I agree that the last reader was annoyingly slow & weirdly halting, but she's not as bad as others make out. I'd rather her slowness than the breakneck gallop of another reader. She read so fast it was impossible to savour fully several very poignant points in the story. I'd rather not listen to that at all.

I always love Wilkie Collins. This one has a superstition touch. Love the idea how soulmates connected through dreams. But I honestly hate the chapter before the final one. It's creepy, confusing and boring at the same time. George appeared to be psychologically ill on that chapter. And I don't like that it was written on such a way. But overal it was AWESOME.

Feast for the ears

I agree 100% with veinticuatro - there are books which need to be performed, not merely recited in a carefully modulated, conventional, restrained voiceover. Kudos to those LibriVox readers who go for the guts of a text. Expression, that's what I look for in a reader-aloud. Well done, Susan Smith Nash, you are a real storyteller.

I love the story, but some of the readers couldn't hold my attention and made me start to drift off to sleep. I felt that Susan Smith Nash did an awful job with the last few chapters of this book. I think she tried too hard and it wasn't natural. I do however love all of Wilkie Collins work.

I like most of Collins books but this one was a little odd. Closer to the end he did go off on a little crazy part that I was not that fond of. The whole thing was a little strange but it also held my attention. Not the best of his books but a good one.