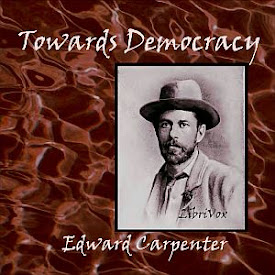 “Civilization sinks and swims, but the old facts remain—the sun smiles, knowing well its strength.” Edward Carpenter (1844-1929) wrote his prose poem, Towards Democracy, styled after Walt Whitman’s Leaves of Grass, in a summer burst of creativity. “Early in 1881, no doubt as the culmination and result of struggles and experiences that had been going on, I became conscious that a mass of material was forming within me, imperatively demanding expression . . .” An English intellectual, Carpenter was in rebellion against Victorian prudery. Railing against Industrialization’s dehumanization, he preached a return to a simple life in harmony with Nature. Towards Democracy reads like Beat poetry—wild flowing word associations, moments of insight so clear they hurt, interspersed with pure rant! Included is an essay Carpenter wrote in 1894 explaining his intent and feelings in writing Towards Democracy. - Summary by Sue Anderson (3 hr 55 min)

Preface: A Note on Towards Democracy

A fine text, quite dry reading

A fantastic, queer, and often intoxicating long poem. Greatly in tune with Whitman, more than the Preface concedes (which in itself is worth study), but in many ways going far beyond what Whitman achieved, reaching out more effectively to less masculine bodies (at the same time as yearning for thr epitome of rural masculinity as a loving&lovable body). S. Anderson's reading is fair, measured, and never hyperbolic (which would send parts of the poem into parody, so grandly does it soar), but I think such a piece could do with rather more enthusiasm here and there, and a little more tenderness elsewhere (for instance, during the beautiful passage of the mother, wishing for transparency so that sun- and moon-light might shine on the unborn child).