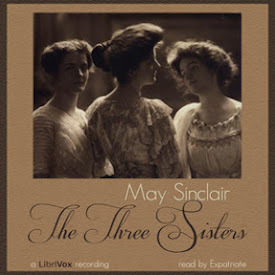 Fascinated as she was by the lives of the Brontë siblings, May Sinclair loosely based her subtly sensual, quietly insurrectionary 1914 novel The Three Sisters on the Haworth moor milieu of the three literary Brontë sisters. Alice, Gwenda, and Mary Cartaret are the daughters of the Vicar of Garth, an abusive father with rigid, selfish expectations for female behavior. Hope of rescue seems to dawn in the person of an idealistic young doctor in the village, but this is no Austen romance. Described with Edwardian restraint, it is still sexual passion that is the underlying theme of the story: the rebellion of human sensuality in almost every major character in the story against the artificial constraints of conventional Society and Religion. Sinclair, herself a fascinating hybrid of Victorian and modern, shows the desperate, inertial ennui inherent in the lives of unmarried late-Victorian women dependent on their male guardians but fired by dreams and desires of their own. Sinclair's gently seditious fiction is always deeply imbued with philosophy as well as human psychology, giving it rich layers of interest. - Summary by Expatriate (9 hr 5 min)

This story tells of hidden love and a lot of hopelessness. the reader does a good job but the story its self is not very good.

I admired Expatriate's consistent and dedicated reading of the tragedy of an enlightened woman ensnared, trapped and dragged down by her less enlightened loved ones.

Thanks for introducing me to May Sinclair! I can't wait to pursue more of her works. Expatriot does a masterful job with this great story.

Expatriate nailed the narration, as usual. The story was a too dark, too tragic. Gwenda's self-renunciation wasn't believable.

Similar to the Bronte Sisters underlying sexual tension... With Cruel Father a Vicar they feared...

well read story of a triad of deception and devotion. Dysfunctional families are not a new phenomena!

Well read. Thank you to the reader. Odd story. Definitely worth listening to.

Wonderful character development of leading persons of the story.