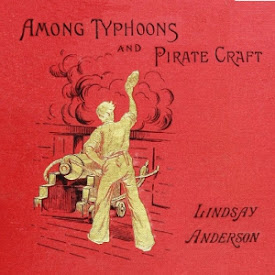 Among Typhoons And Pirate Craft

Anderson served as third officer aboard the Eamont. Eamont was an opium clipper built in Cowes. Eamont was involved in the opening of Japan to foreigners in 1858, serving as a dispatch boat between Nagasaki and Shanghai, and was one of the first vessels to open up a trade with Formosa. The Eamont was employed in the negotiations for the first commercial treaty with Japan. On this occasion she ran into Nagasaki and quietly dropped anchor, in spite of the fact that opposition to the proposed commercial treaty was very strong at the time. On the following morning 150 boat-loads of Japanese attempted to tow her to sea, being evidently ignorant of an anchor's raison d'etre. But though they attempted several similar methods to get rid of her they refrained from any armed attack, and, eventually, her mission was completely successful. This was in 1858, and the Eamont's crew saw many wonderful sights in that tierra incognita. The September Typhoon of 1858 destroyed several well-known opium clippers at Double Island, including the Anonyma, Gazelle, Pantaloon, and Mazeppa. Eamont was anchored off Double Island, with "150 fathoms of chain out and a second anchor backed on it at 60 fathoms." The waves in the anchorage were estimated to be as large as 40 feet, and the Eamont’s crew had to cut away her masts. Eamont was one of only two ships in that anchorage to survive the night, the other being the Hazard. (See Wikipedia article on Eamont (schooner)) (Wikipedia and david wales) (6 hr 7 min)

A really enjoyable seafaring tale documenting how trading links between the west and Japan were opened up. The story is told from the perspective of a ships officer and there is much detail in how storms and pirates were overcome. I very much appreciated the practical glimpse provided into life at sea at the time and the first experiences of dealing with the Japanese and their culture and traditions.

excellent historical story about travels between USA and the Orient in the 1800s. great reader. it's an exciting story.