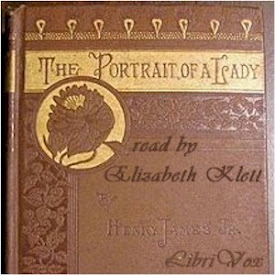 The Portrait of a Lady (version 2)

The Portrait of a Lady is a novel by Henry James, first published as a serial in The Atlantic Monthly and Macmillan's Magazine in 1880–81 and then as a book in 1881. It is one of James's most popular long novels, and is regarded by critics as one of his finest. The Portrait of a Lady is the story of a spirited young American woman, Isabel Archer, who "affronts her destiny" and finds it overwhelming. She inherits a large amount of money and subsequently becomes the victim of Machiavellian scheming by two American expatriates. Like many of James's novels, it is set in Europe, mostly England and Italy. Generally regarded as the masterpiece of James's early period, this novel reflects James's continuing interest in the differences between the New World and the Old, often to the detriment of the former. It also treats in a profound way the themes of personal freedom, responsibility, and betrayal. - Summary by Wikipedia (23 hr 6 min)

That Isabel! I just want to shake her!

dissatisfying story of the hyper scrupulous Isabel, a beautiful American heiress, who brushes off all her true soulmates to marry a bitter, lying, penniless despot, and, given a second, third and fourth chance to dump him, sticks with him. Grrrr. Elizabeth Klett gets 5 stars as usual.

Isabel was a frustrating character in my opinion. Overall I enjoyed the story as a whole but I absolutely hated the ending. I guess even back then women had poor judgement in men. I absolutely LOVED the reader, she did a wonderful job of bringing each character to life.

Ms. Klett is amazing. I am not sure if I could have made it through this book without her talent. This book is not one of my favorites.

I am still waiting for something to happen after 12 chapters...yawn.

Professor Klett is an Artist of exceptional talent and genius, as such, a match for this challenging Masterpiece. This novel requires an intellectual understanding of the characters to make a thorough comprehension of the ending. If the reader (or listener in this case) can truly believe in the heroine of our story, then the true nature of her personal strength, growth, and judgment will indeed make this story one of great beauty and satisfaction. But, as I said, that is entirely up the reader to consider and ponder for long after the amazing conclusion. James greatest works are not for the casual reader, but for those who seek to understand the deeper forces of both good and especially evil in the human psyche. I am writing this review long after my encounters with this great work because I still think about how it has helped me understand people from long ago, those of whom I now remember as an old man. Ps. Maybe Isabel is the final betrayer?! Perhaps she returns to the rescue? Perhaps she became the stronger? Think about that…

A brilliantly intelligent reading, observant of sentence syntax and meaning (too many LibriVox readers merely recite in mechanical iambic pentameter or whatever sing-song suits their individual breathing pattern). . Although I’ve read this novel several times over the years, I’ve never before thought about Isabel as being an instance of what is now called high-functioning female autistic. Although very intelligent, at critical moments she’s completely tone deaf to other peoples’ emotions and/or motivations. When making important decisions about her life, she focuses totally on her own “guiding principle” without assessing it in context. She’s terrified of strong feelings (the emotional equivalent of loud noises). Or so she seems to me. (There’s a dissertation there someplace, if it hasn’t already been written).

This book was very well written but it was extremely unfulfilling. Elizabeth Klett, as always, did a superb job if reading. The main character Isabel, is portrayed as an intelligent girl but she comes off as very immature, unthinking, self absorbed and constantly making poor choices for stupid reasons. Only listen to this if you want to come to the ending wondering why you wasted your time.

I really enjoyed the way this was written. But the story is too sad... Also Isabel is smart but in a stupid way. A bit too much naval gazing on her part. Henrietta was good for her but she needed more people like that around her to bring her down to earth. She made a lot of silly choices that her friends tried to prevent.