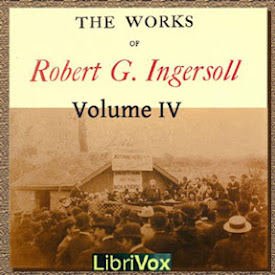 Col. Robert G. Ingersoll, one of the greatest orators of the mid-19th century, was a highly sought after lecturer/toastmaster who sold out every hall he engaged throughout America. He was an ardent abolitionist, agnostic, humanist, humanitarian, supporter of the arts, and woman's rights, and member of the Unitarian Church, who railed against the absurdities of the Bible and cruelties of Christianity, praised technology, inventors, authors and great statemen for their contributions to the uplift of mankind. Mark Twain, a contemporary of Ingersoll, reported that no one could stir up a crowd like Ingersoll, and that by the end of the Colonel's toast at General Grant's Victory Banquet after the Civil War, everyone was standing on chairs and tables stomping, cheering, crying and madly waving their napkins. ( Summary by Michele Fry) (11 hr 4 min)

How To Reform Mankind

The Foundations Of Faith, Part 1

The Foundations Of Faith, Part 2

What, exactly, are the “cruelties of Christianity?” Asking for money so that they can feed the hungry and keep the church from falling down?! THAT is considered BAD?! Well… to cut this some slack, this WAS written a long time ago, and then, the church wasn’t quite as… fair as it is now. So, the church has fixed most, if not all, of his complaints about the church. Thank you for writing this book, my faith in Catholicism is now stronger, as is my trust in the church, for fixing some of the more real issues complained about here. Alright if you disagree with me, just voicing my opinion. 1.5 stars only because the readers were good.