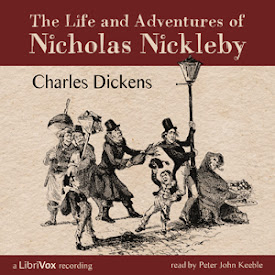 The Life and Adventures of Nicholas Nickleby (Version 3)

Nicholas Nickleby was Dickens's third novel following on from Pickwick Papers and Oliver twist. It has a cast of wonderful characters that include Wackford Squeers, the reprehensible and villainous headmaster whose reign of terror at his school in Yorkshire resulted in the abuse and deaths of many of his unwanted and orphaned children, Mr Vincent Crummles and his hilariously inept touring company, the munificent Cheeryble brothers, Ralph Nickleby, Nicholas's uncle, a mean spirited man who is driven by avarice and irrational hatred of his nephew, Smike a boy brutalised by Squeers and his family leaving him mentally and physically handicapped and Mrs Nickleby, Nicholas’s mother, who is pretentiously genteel and somewhat garrulous.

There are many more finely drawn characters who combine to make this not only a comic masterpiece of the period but more than one love story threads its way through the dialogue. Probably what we would call today a ‘Romacom’ and as such Nicholas Nickleby never ceases to delight. (Summary by Peter Keeble) (31 hr 36 min)

Chapter 1- Introduces All The Rest

Of Mr Ralph Nickleby, And His Establishments . . .

Mr Ralph Nickleby receives sad tidings of his brother . . .The reader is inform…

Nicholas and his Uncle . . . wait upon Mr Wackford Squeers, the Yorkshire Schoo…

Nicholas starts for Yorkshire. Of his Leave-taking and his Fellow-Travellers . …

In which the Occurrence of the Accident . . . affords an Opportunity . . .to t…

Mr and Mrs Squeers at Home

Of the Internal Economy of Dotheboys Hall

Having the Misfortune to treat of none but Common People . . .

Acquaints the Reader with the Cause and Origin of the Interruption . . .

Nicholas seeks to employ himself in a New Capacity . . .

Follows the Fortunes of Miss Nickleby

Miss Knag, after doting on Kate Nickleby . . . makes up her Mind to hate her fo…

Descriptive of a Dinner at Mr Ralph Nickleby's . . .

Wherein Nicholas at length encounters his Uncle . . . His Resolution.

Madam Mantalini finds herself in a Situation . . . and Miss Nickleby finds hers…

Nicholas, accompanied by Smike, sallies forth to seek his Fortune . . .

Treats of the Company of Mr Vincent Crummles, and of his Affairs, Domestic and …

Of the Great Bespeak for Miss Snevellicci . . .

Concerning a young Lady from London . . . and an elderly Admirer who follows i…

Is fraught with some Danger to Miss Nickleby's Peace of Mind

Of the Proceedings of Nicholas, and certain Internal Divisions in the Company .…

Festivities are held in honour of Nicholas . . .

Of Ralph Nickleby and Newman Noggs . . .

In which Mr. Ralph Nickleby is relieved, by a very expeditious Process, from al…

Wherein Mr. Ralph Nickleby is visited by Persons with whom the Reader has been …

Comprises certain Particulars arising out of a Visit of Condolence . . . Smike …

In which another old Friend encounters Smike, very opportunely . . .

Containing some Romantic Passages between Mrs. Nickleby and the Gentleman in th…

Illustrative of the convivial Sentiment, that the best of Friends must sometime…

Officiates as a kind of Gentleman Usher, in bringing various People together

Containing Matter of a surprising Kind

Throws some Light upon Nicholas's Love, but whether for Good or Evil the Reader…

Mr. Ralph Nickleby has some confidential Intercourse with another old Friend. .…

Being for the Benefit of Mr. Vincent Crummles, and positively his last Appearan…

Chronicles the further Proceedings of the Nickleby Family, and the Sequel of th…

The Project of Mr. Ralph Nickleby and his Friend approaching a successful Issue…

Containing the further Progress of the Plot contrived by Mr. Ralph Nickleby and…

The Crisis of the Project and its Result

Ralph Nickleby, baffled by his Nephew in his late Design, hatches a Scheme of R…

How Ralph Nickleby's Auxiliary went about his Work, and how he prospered with it

In which one Scene of this History is closed

The Plots begin to fail, and Doubts and Dangers to disturb the Plotter

The Dangers thicken, and the Worst is Told

The Brothers Cheeryble make various Declarations for themselves and others . . .

An old Acquaintance is recognised . . . and Dotheboys Hall breaks up for ever

Well read. I like this reader's pacing better than the other prolific Dickens soloist. Some wristwatch alarms and other extraneous sounds are in the recordings, but I shrug them off. LV doesn't claim or aspire to perfection. :)

I appreciate this reader, who took his time and effort to share the book with us. Despite several distracting misprounications, the book is well read.

The Life and Adventures of Nicholas Nickleby

a very good story read by a very good reader with the correct accent for the story.

Love this reader ! And the book is classic Dickens. well worth the time.

I’ve listened to a few recordings by this reader and recommend.

I love this story, over and over again. Thank you Mr Keeble