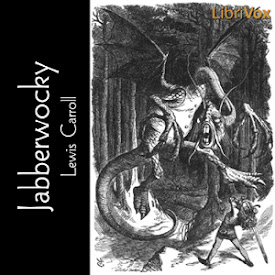 LibriVox volunteers bring you 34 different recordings of Jabberwocky, by Lewis Carroll. This was the weekly poetry project for the week of January 21st, 2007. (0 hr 56 min)

the volume and overall sound quality is extremely poor.

CS - The only female reader to make my list. Very good. The only flaw being that the opening and closing verses sound like they're part of a different story. DRB - Read slowly and deliberately - i liked the changes in tempo and emphasis. FEB - creepy. MAC - Very consistant, less energy than the other recordings. The kind of reading you'd expect from a novel. TD - Mostly Scottish accent, with plenty of energy, enthusiasm and character. By far the most impressive reading on the list. WH - Very well read. Minimum of fluff.

I really enjoyed listening to Claire Cornelia read Jabberwocky, it was so fun to listen to, good job to her! I didn't honestly care for any other readers after that, but great job everybody!

The whole thing is not bad though just the first part so Don’t worry! Also Claire Cornelia was so cute!