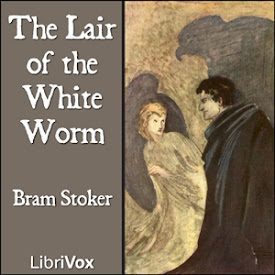 The Lair of the White Worm

The Lair of the White Worm (also known as The Garden of Evil) is a horror novel by Anglo-Irish author Bram Stoker, who also wrote Dracula. It was published in 1911.

This book centers on Adam Salton who is contacted by his great uncle in England, for the purpose of establishing a relationship between these last two members of the family. Adam travels to Richard Salton's house in Mercia, and quickly finds himself in the center of some inexplicable occurrences. The new heir to the Caswall estate, Edgar Caswall appears to be making some sort of a mesmeric assault on a local girl. And, a local lady, Arabella March, seems to be running a game of her own, perhaps angling to become Mrs. Caswall. There is something strange about Lady March, something inexplicable and evil.... (Summary from Wikipedia)

Note: This book contains racial comments that may be offensive to modern listeners. (5 hr 48 min)

The Caswalls of Castra Regis

A Visit of Sympathy

The Mystery of "The Grove"

An Enemy in the Dark

In The Enemy's House

On the Turret Roof

The Breaking of the Storm

I'm not voting stars here, so be calm. @Betsie, I LOVE your style - in your review more than the book. That's a compliment! your refreshing self-insight is great stuff. I now assume you were assigned this book. Listeners are not given information on whether the reader self-selected; I always assume they did. My bad. I wish there were a space for the reader to say a few sentences about how they became involved in the piece and what artistic choices they made in reading the piece. Maybe each reader could give the first "review"? Thanks for agreeing to read when the site asks you to. @ Parsnips. Let's try to be accurate in our statements. You very wrongly assert that Shadows_Girl is always trashing Librivox readings. I checked - that not at all true. See, e.g., The White People. Shaodows_Girl most often reviews movies and radio. @Shadows_Girl. I like critic s who are willing to give an honest rating. (I've been told to "be NICE or say nothing", advice I shall ignore). However, I would be interested to see you give us more basis than you do. It's not true that Librivox listeners are LAZY. Neither can any movie be considered a substitute for the original book. So, thanks, but stay on topic; let's comment on the piece and the performance.

(Original post made April 2010) Quite frankly, this book sucked (regardless of what you think of my reading voice). One thinks of this author and expects another great classic, but this book was so poorly constructed it felt like a dozen different novels all mushed together and none of them were satisfactorily resolved. The plot hopped around like a monkey tap dancing on a water bed leaving the reader wondering what the author was thinking...or not thinking when he wrote it. Sounds like a topic for a research paper... let me know what you come up with. If you prefer a variety of voices, here is another LibriVox version: http://www.archive.org/details/lair_white_worm_0911_librivox Edit to add on 5/26/2010: I did indeed select this book to record... for the following three reasons: 1) At the time I recorded this, I was reading aloud to my husband, so we were choosing books we thought we both might enjoy. 2) It was also selected because it was on the short side as it was one of the first full books that I recorded solo, and I wanted to have a chance at actually finishing it. 3) Most importantly, it had the word "worm" in the title (recorded right after "Fishing with a Worm")... incidentally, there weren't very many books in Project Gutenberg about worms at the time =D

Shadow girl's suggestion that you should watch the film is a terrible one.

Seriously, the film has no link to the book, deliberately has the charatcers act like idiots so that the twist ending works, and has lengthy bitswhich are just an excuse to have the woman playing the worm either naked or naked but for blue paint. The less said about the...um..adult implement...she uses on one of the other female characters, the better, given that it doesn't appear in the book, and is played purely for purience in the film. As to this recording: the recording's good, but the book itself is terrible. You think the guy who did Dracula would be able to build an atmosphere, but his style of horror is so foreign and tepid to our time that it basically falls flat now. What if everyone in your tiny English village was made miserable by an oppresive force? Wouldn't that be terrible? Well, yes, but not, of itself, interesting. That's not the reader's fault. Stoker just doesn't shock us anymore. "The young lady with the temper might be an ancient, evil dragon dressed as a debutante!" was pretty scary back in his day: now it's monster of the week stuff from any number of television programs.

I READ THIS BOOK UNTO THE END. IT WAS.RATHER EVIL AND AT THE END UNBELIEVABLE BUT I FOLLOWED IT THROUGH. I HAVE HEARD THIS READER OFTEN AND DO NOT HAVE A PROBLEM WITH HER, AT LEAST SHE PUTS THE COMMAS AND FULLSTOPS WHERE THEY BELONG. MY GREATEST DISAPPOINTMENT WAS THE READING OF 'LETTERS OF A QUEENSLANDER' A WORLD WAR 1 STORY OF AN ARMY DOCTOR. THE DOCTOR WAS A MAN AND THE STORY WAS READ BY A WOMAN. NOT BADLY READ BUT COULD NOT GIVE THE SAME VOICE INFLECTIONS AND FEELINGS THAT A MAN COULD HAVE IN THIS SITUATION. LOVE LIBRIVOX. MY LIFESAVER AS I AM ON THE BED MOSTLY. SOME READERS ARE BAD BUT I GET TO HEAR STORIES. CATARACTS FOR ONE STOP ME BEING ABLE TO READ. KEEP IT UP VOLUNTEERS. THOSE COMPLAINING SHOULD VOLUNTEER THEMSELVES.SOMETIMES I HAVE A LAUGH AS A DOG BARKS IN THE BACKGROUND AND OTHER SOUNDS. I HAVE TO TURN OFF THE SOUND TO MAKE SURE OF THE SOUND.

Besides being a Bram Stoker classic it didn't quite rock my world. So many questions unanswered, so many strange occurrencs that had little explanation & so many staring bouts of supremacy that made little sense. There were several parts of the storyline I didn't understand but not through my own ineptitude...as Ive read 'It' by S. King twice & the Dune series by F. Herbert dozens of times. Mr Stoker's archaic phrases & constant repetition of old sayings turned the Lair of the White Worm into a long-winded bedtime story. Its unfortunate, as this tale is original, & Mr Stoker is a household name due to his writing ability that was way ahead of his time.

I am tired of Shadows_Girl's bitter and vitriolic "reviews" of Librivox recordings. Unless you are determined to dislike American accents, this is a perfectly satisfactory recording. Certainly, there are some Librivox voices that are not to my taste and there are some recordings that are not of particularly good technical quality. But many are excellent in both respects, and provide huge enjoyment to thousands of people. And please don't be put off by one person's odd compulsion to belittle the whole output of Librivox.

I have listened to the other version, and it is pretty good with a few GE tweaks. The story itself is just bad, IMHO. I fail to see why all the "I disagree with your review and I am going to insult you for it" comments are coming out. Everyone is entitled to their perspective; that's why the reviews are averaged out. Enough listeners will give a good idea of where the book is at.

i probably enjoyed it more because i saw the movie, though similar really only in title. it kept me listening through the slow beginning but it was probably one of his weaker stories. and of course the use of the n-word was quite a bit much for me. it was in of itself like a b-movie just not the one of the same title.