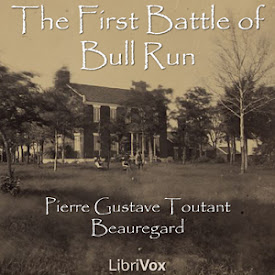 The First Battle of Bull Run

General Pierre Gustave Toutant Beauregard was one of the senior commanders of Southern forces during the Civil War. It was he who initiated the hostilities by opening fire on Ft. Sumter in Charleston harbor, in April, 1861.

In July of that year, having taken command of the Confederate Army of the Potomac, he triumphed in the first serious clash of the war, at Manassas, Virginia. His army, aided by reinforcements from Johnston's army in the Shenandoah Valley, routed a Federal army under General McDowell. Had it been his army instead that routed, it is possible the Civil War might have ended that same year, as the path to Richmond would have been wide open.

This is his account of the battle, including the strategic situation leading up to it. As an afterward, he added a very revealing appraisal of the relations between him and Confederate President Jefferson Davis, and the reasons why, in his opinion, the South failed to win its war of secession. (1 hr 42 min)

The Conduct of the Battle

Subsequent Relations of Mr. Davis and the Writer

I have an interest in the American Civil War going back many years and so when I noticed this non fiction book on Librivox I rushed home to download it. To my delight I found that it was read by one of my favourite Librivox readers, Mark Smith. The book was well paced, with the General leading us though the run up to the battle and into the events of the battle itself. I found it very interesting and satisfying to hear the details and concerns of a General who was actually there in the middle of the action. If you have any interest in the American Civil War, then this book is a must read(listen) and due to it being a short one, you no excuse not to! Reading 3/3 Production 2/3 Story 3/3 Total Score 8/9 Find more of my free audio reviews at http://freeaudioreview.blogspot.com

This reading comes from Vol. 1 of "Battles and Leaders of the American Civil War", a compilation of articles and reports first published beginning in 1884 in the "Century" magazine. Here Gen. Beauregard gives his account of that first battle. Most interesting is the third part in which the general, often given to flights of fancy, gives his ideas of how and why the Confederacy should've fought an offensive war and how they could've beat the North in the first 6 months of the war. Very good reader. Enjoy.

I believe Beuragard's believe in winning was after winning a battle was a wishful thinking. Confederates won battle but also at considerate cost in their own troops. This battle showed that was won't be decided by single battle, even though it has been biggest one up to that day.

a voice from the past, fascinating