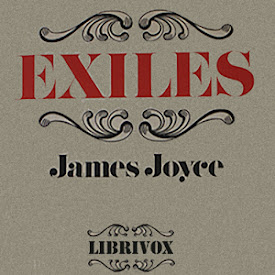 Exiles is a play by James Joyce, who is principally remembered for his novels. It was rejected by W. B. Yeats for production by the Abbey Theatre. Its first major London performance was in 1970, when Harold Pinter directed it at the Mermaid Theatre. The basic premise of Exiles involves a love triangle between Richard Rowan (a Dublin writer recently returned from exile in Rome), Bertha (his common law wife) and his old friend Robert Hand (a journalist). (There are obvious parallels to be drawn with Joyce's own life – Joyce and Nora Barnacle lived, unmarried, in Trieste, during the years the fictional Rowans were living in Rome, while Robert Hand is roughly the same age of Joyce's friends Oliver St. John Gogarty and Vincent Cosgrave, and shares some characteristics with them both.) This arrangement is slightly complicated by a second love triangle, involving Rowan, Hand, and Hand's cousin Beatrice Justice. - Summary by Wikipedia