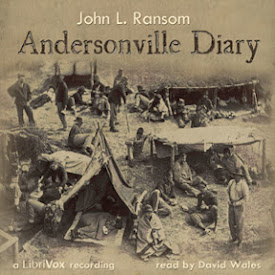 John L. Ransom was the quartermaster of Company A, 9th Michigan Volunteer Cavalry during the American Civil War and a Union prisoner in the infamous Confederate prison at Andersonville, Georgia. This is his diary which he published some few years after the end of the Civil War. Note that in pages 193 through 301 are included 1) List of the Dead and 2) Recapitulation of Deaths By States; both of these sections are omitted from this LibriVox reading.

The Andersonville National Historic Site, located near Andersonville, Georgia, preserves the former Camp Sumter (also known as Andersonville Prison), a Confederate prisoner-of-war camp during the American Civil War…. The site is an iconic reminder of the horrors of Civil War prisons. It was commanded by Major Henry Wirz, who was tried and executed after the war for murder. It was overcrowded to four times its capacity, with inadequate water supply, reduction in food rations, and unsanitary conditions. Of the approximately 45,000 Union prisoners held at Camp Sumter during the war, nearly 13,000 men died. The chief causes of death were scurvy, diarrhea, and dysentery. Friends provided care, food, and moral support for others in their social network, which helped a prisoner survive. For the highlights of the trial of Henry Wirz see Librivox recording Henry Wirz, Commander of Andersonville Confederate Prison: Trial and Execution (Excerpt from Trial Of Henry Wirz) by United States Army Staff Judge Advocate. - Summary by Wikipedia and david wales (8 hr 32 min)

Part 5 From Bad To Worse

Part 10 Escape But Not Escape

Part 14 The Finis -- What Became Of The Boys

excellent reader and quality recording. true events recorded in this diary of events. learned a great deal about life in andersonville. like the lack of tents & shelter as well as the lack of wood. hard to boil water to kill off bacteria if u cant get hold of any wood. you can feel the disparity of the written in the days leadinv up to his removal from that pow camp. its easy to see that he was only days away from death and without his friends help would have been left there to die. a recommended read and i would hope a required reading for schools! i never heard a thing about civil war pow's in school and think they do not teach enough history for us to learn from history mistakes.

Excellently read diary of a civil war prisoner in...

Excellently read diary of a civil war prisoner in the brutal southern Andersonville prison camp. But the northern prison camps for Confederate POW's were even far worse, and there there was no excuse, as the south could not even feed and clothe its own soldiers. As always it is the victors that write the history books. TO REDTURTLE: Read about the Point Lookout and Elmira prisons run by the U.S. government in the north. Descendants of Point Lookout POW Organization: http://www.plpow.com/index.htm

I beg to differ that Union prisons were worse than Confederate prisons. While the victors may get to write the histories, contemporary events are more telling. One of the reasons that the Union government did not exchange prisoners (a source of much anguish in Andersonville) was that Confederate prisoners in Union prisons were in such good physical and mental condition that they could return to fighting and thus prolong the war.

it took me a little while to get into this but so glad I did, what a charming young man he must have been ,and a great attitude that obviously helped get him through. another great job by Mr wales

great book read by a very good reader. I did not expect the book to be as interesting and engaging as this was.

Great account of conditions and what happened. A must read.