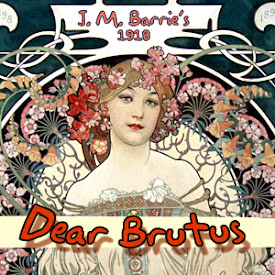 At a house in the country 8 guests are invited to enter a magical wood to see what might have happened had they made a different choice in life. Even though they are warned away from the wood, they take a chance and enter. The title comes from Shakespeare: "The fault lies in our selves, dear Brutus, not in our stars...," and summarizes the theme of this play: given a second chance, will people still make the same mistakes? (summary by David O)

I had a hard time getting into the story. I didn't understand the first scene - apparently the butler is a thief? And I couldn't keep the characters straight. But that all came together later on. It's a thought-provoking piece with just a touch of whimsy to keep it from being too heavy. Readers were good, but not Tony award performances. I felt that the timing was a bit off (silence between speakers was unnaturally long), but I cured that by speeding up the playback a little bit. :) I'll give it a 4 out of 5.

A fascinating play, well performed by the Librivox players! Barrie's works are so full of wit and imagination; I should like to see more of them read and performed by such talented and enthusiastic volunteers. Thoroughly enjoyed. Thank you to all the volunteers.