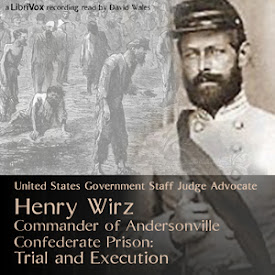 Henry Wirz (November 25, 1823 – November 10, 1865) was the only Confederate soldier tried after the end of the American Civi War. He was tried, convicted, and executed, not for being a Confederate soldier, but for conspiracy and murder relating to his command of Camp Sumter, the infamous Confederate prisoner-of-war prison at Andersonville, Georgia. Wirz encouraged and commanded barbaric and murderous policies and actions in the prison. This Librivox recording is excerpts from the 850 page summary of the trial written by the Army Judge Advocate (prosecutor) for, and at the command of, The Congressional House Of Representatives, 40th Congress, Second Session, Ex, Doc. No 23. This recording omits the 614 pages of testimony by very numerous witnesses, both Federal and Confederate. What is recorded conveys the substance of the witnesses’ testimony. For a prisoner’s view of life in the prison camp see LibriVox recording Andersonville Diary, Escape And List Of The Dead by John L. RANSOM. - Summary by Wikipedia and david wales (9 hr 33 min)

well done David Wales, this must have been a tricky book to read . I highly suggest that anyone planning to listen to this should listen to diary of Anderson ville first.