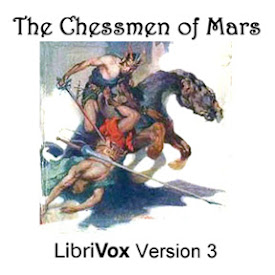 The Chessmen of Mars (version 3)

In the fifth book in the Barsoom series, Tara of Helium, daughter of John Carter, becomes lost in an unknown area of Mars when her single-seat flier is caught in a rare Martian hurricane. She is first captured by the bizarre and hideous Kaldanes, then the brutal Manatorians, where she is the prize in a tournament of Martian chess, jetan, that is played by live game pieces, and to the death! (Summary by Mark Nelson) (9 hr 16 min)

Tara in a Tantrum

At the Gale's Mercy

In the Toils of Horror

The Choice of Tara

The Old Man of the Pits

Another Change of Name

A Play to the Death

A Task for Loyalty

The Menace of the Dead

The Charge of Cowardice

A Risk for Love

At the Moment of Marriage

Possibly the best book of the series

Wow, what a pleasant surprise. I had thought about only listening to the first three books because I had heard that John Carter didn't play much of a role in the 4th and 5th books. I'm glad I pushed on in to the last two books. Both were as good as the rest of the series and Chessmen is probably my favorite entry in the series (primarily due to the bizarre Kaldane character named Ghek). As usual there is an awful lot of cliffhangers. A fair amount of romance and, of course, loads of action and sword play. It's campy, it's pulpy, and it's a simple guilty pleasure. Mark Nelson does another bang up job but I really didn't like the fact that now, after already narrating 4 books in the series, he decided to give John Carter a very heavy southern accent (which is probably more accurate for the Virginian). Luckily John Carter isn't in the book much but when he is he sounds like Colonel Sanders. I wish Mark would have stuck with the standard voice he used for John Carter throughout the rest of the series. But as noted this happens very briefly and Mark's reading is flawless as usual. I highly recommend this recording and honestly you really can't go wrong with just about anything read by Mark Nelson.

Adventurous and enteraining from beginning to end, as all five of the John Carter novels. It would be most impossible to find a more dynamic and enjoyable narrator, for Mark Nelson has been a complete joy for all five books.

the same but different

Burroughs surpasses himself in imagination in this, his 5th book in the Mars/Barsoom series. Exciting. Fun. Mr. Nelson's narration is expressive and flawless. I have listened to all 5 of his Barsoom readings.

Another great story by ERB

Mark Nelson did a great job reading as usual, although giving the character of John Carter a southern accent after all these novels was a little odd.

This is my favourite book and reader. I listen to it at least once per month. Give it a listen and you'll be a fan too.

Loved the whole series! Great stories of excitement and adventure with romance too! Wonderful reading as always by Mr. Nelson, thank you again!

Incredible but sad that it's over.

Nice way to end the series.I wish it would have kept going though.