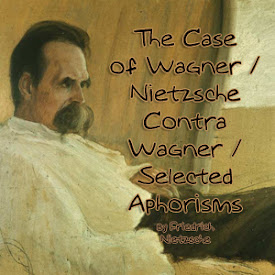 A collection of three of Nietzsche's writings concerning the music of Wagner. In particular, he relates Wagner's music as degenerate, unrefined and unintelligent and relates it to a gradually degenerating German culture and society. The translator provides a detailed introduction. - Summary by the Reader (3 hr 0 min)

The Case of Wagner First Half

The Case of Wagner Second Half

I have just started to read Nietzsche and this caught my curiosity. Perhaps being shorter helped. I expected it might be a bit dry, but found myself actually taking notes and replaying parts that I wanted to write down. It is very well read, but I will need to see it in print because so much of the author's phrases appealed to me that I wanted to write them down and think about them. He seems to be analyzing Wagner's use of music for its effect on the masses. He explains his views in a way that focuses on genuine art and aesthetics and believes that Wagner was not a great musician at all but "something else altogether" and as a great actor and theatrical genius, made use of "bad music, perhaps the worst" merely for its effects. Nietzsche calls him "a master of hypnotic trickery". Many of his comments were humorous and/or very quotable. Ex: [he appeals to]"cultured cretins...the gastrically happy..."; and another: "the three great stimulants of exhausted people are brutality, artificiality, and innocence ". He has much to say about degenerate influences and attitudes of the time. I came away with great respect for the author in his understanding of the workings of art and even moral responsibility.