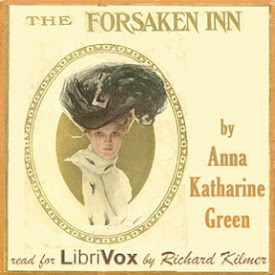 Told from the perspective of a Mrs. Truax, the owner of an inn during the time of the American and French Revolutions, "The Forsaken Inn" is a locked-room mystery that keeps readers guessing about what has happened. A young couple stays at the inn for the night, and goes on their way in the morning ... and several years later, the bride's body is found in a secret room of the inn. Yet, many people saw that bride leave with her husband. How can this be?

Green tells her tale through Mrs. Truax' diary, and through letters and discussions with other characters who were friends of the young couple. An entertaining and highly recommended read. (Summary by Richard Kilmer) (6 hr 31 min)

Am Interim of Suspense

At the Foot of the Stairs

A Cassandra At The Gate

In the Halls at Midnight

The Stone in the Garden

A Surprise for Honora

In the Secret Chamber

For the Last Time

i liked the plot. although u know most of what is going to happen, there are some twists that u r not expecting. But, and I hate to say this because I know how hard the volunteers work and the time they give. the Narrator would be good in a different genre. he was so monotone that it was difficult to stay interested. ( sorry)

A very good story. I enjoyed the narration of Richard Kilmer one of LibriVox very good readers. Very good story with some interesting twists. Another one of AKG's fine mysteries. Good listen

This, I'm sure, is a great book, but it is VERY hard to listen to the reader. Each time he ends a sentence, he goes up in pitch like he's asking a question.

Starts off well, with an excellent depiction of the alternatiing horror and self-doubt experienced by perceptive people who fear something very bad is happening among strangers, but have no evidence to take action upon it. Proceeds with the usual AKG page-turning story-telling, though it gets a little weird around the duel. Sometimes it's better not to make a metaphor literal! Like many AKG novels, the story is told almost entirely by women, with the primary narrator a self-sufficient business woman who never marries. This is not at all the point of the story, but was uncommon at the time the book was written, and even more so at the time it was set (100 years earlier). It draws an interesting, if entirely subtextual, contrast to the motivations of love, status and wealth that drive the other characters. It bothers me that upper class perpetrators are never tried for their crimes in books of this era. Silence, even when perpetrators are discovered, is often justified as necessary to "protect the innocent." Remorse and accidents of history are not sufficient consequences for the crimes commited in this book! There also seems to be a bit of a math problem with the age of the daughter, who could not be more than 16, if that, yet is entertaining proposals of marriage. ILibrivox makes it difficult to communicate feedback to readers, but give the thousands of hours reader Richard Kilmer has donated, I feel sure he would want to know that "lest" (rhymes with "best") and "least" (rhymes with "beast") are two different words, with different pronunciations and meanings. Likewise "fathom" and "phantom."

A Good Book with Excellent Narration

This is my second Anna Katherine Green book and I enjoyed it immensely. It is more of a drama than a mystery but held my interest through the end. It surprises me when folks find Mr. Kilmer's voice somewhat difficult to listen to. He is one of my favorite narrators with his soothing voice and no dramatic voices. I think if one listens to Richard Kilmer's narration for a while it will grow on them in a very positive way. Thank you LibriVox and Mr. Kilmer for the enjoyment I received from this book.

Very interesting book! I truly enjoyed the unique plot . It has the makings of a great movie. Although strictly speaking, it isn’t a horror/paranormal story, it definitely has a creepy feeling to it. I believe the narrator did a great job, but I saw where others mentioned that many of his sentences sounded like questions that were supposed to be statements. These narrators volunteer their time and talent to provide this service, and I am truly grateful and appreciative.

I actually enjoyed the story. it was refreshingly different than the normal mystery but semi hard to follow because of the stories inside the story. everything is told in the first person but there are like 4 different people talking and it's a little confusing

The story has all the creepy elements that make a good vintage mystery: a supposedly haunted house, secret rooms, passion and greed, assumed identities and a crime that lies hidden for 16 years. The reader does a great job.