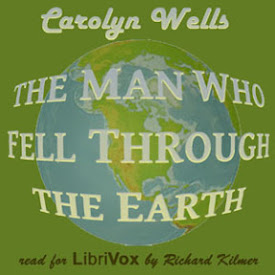 The Man Who Fell Through the Earth

A lawyer is leaving his office on the top floor of an office building. He sees the shadows of two men fighting through the clouded glass of an office door followed by a shot from the office across the hall. He goes to investigate. He finds no sign of either victim or assailant despite the fact that no one could have passed him in the hallway without being seen. A murder has been committed, that of the banker. Who is the murderer? A business associate, the banker’s beautiful ward, or a mysterious woman who had been in the office earlier? And what part, if any, was played by the amnesia victim pulled from the river; a man who insists that his earliest memory is of falling through a hole in the earth? (Summary by Richard Kilmer) (6 hr 42 min)

The Man Who Fell Through The Earth

The Man in Boston

Really well narrated by Richard Kilmer. I really enjoyed the hunt for Manning and the identity of the man who fell through the earth and who murdered the banker and why. I liked the story and it kept my interest throughout the story. Thanks to Richard for a great reading enjoy all of his works and thanks to LibriVox

Good mystery with several issues to solve and is well narrated by Richard Kilmer. A murder, a missing person and , a man who has lost his memory of who he is makes for a very interesting mystery. Thanks Richard for your usual fine job.

A well done thriller, interesting throughout. It took a lot of planning to end it in such a satisfying manner. Richard Kilmer has an occasional pronunciation gaffe, but I fail to understand how anyone could be anything but mesmerized by his melodious voice. In fact, his unusual cadence only serves to make it seem that he is observing the action rather than merely reading it. Bravo!

The summary covers the plot nicely. I liked this mystery. The characters in it were interesting, with unique behaviors and quirks. The story was predictable, but still fun. I listened to it on my tablet while driving to work, and it was a delightful way to pass the time. Reader was excellent, and quality of recordings was likewise excellent.

I found the unnatural Cadence and rhythm of the reader so difficult to listen to that I had to quit the story part way through. Can't believe all of the reviewers who say what a great reader he is, so out of touch with natural speech.

One of my favorite narrators

2019 - it's been several years of listening to this, I still enjoy it as it were the first time. I notice a few extra items that were missed before. Priceless enjoyment.

I didn't think I was going to like this book, but it surprised me. It was very entertaining and the ending was a total surprise. The reader is very good and made it very enjoyable.