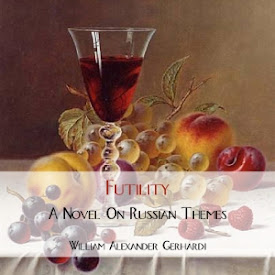 Futility: A Novel on Russian Themes

From the preface written by Edith Wharton:

Then I fell upon Futility. Some one said: “It's another new novel about Russia” –and every one of my eager feelers curled up in a tight knot of refusal. But . . . I read on, amused, moved, absorbed, till the tale and the journey ended together.

This, it seems to me, is the most striking quality of Mr. Gerhardi's book: that he has (even in this, his first venture) enough of the true novelist's “objectivity” to focus the two so utterly alien races to whom he belongs almost equally, by birth and bringing-up – the English and the Russian – to sympathize with both, and to depict them for us as they see each other, with the play of their mutual reactions illuminating and animating them all. - Summary from the preface by Edith Wharton (6 hr 50 min)

Weirdly alienated immersion of Anglo-Russian protagonist in the bizarre domestic life of a family making its way with the Revolution unfolding around them but apparently not having much more than a financial impact on them. Author lingers on the peculiarly Russian manners and attitudes of his subjects. Beautifully read and enjoyable tale in the Seinfeld mode of not much happening but nonetheless a lot of busy-ness.