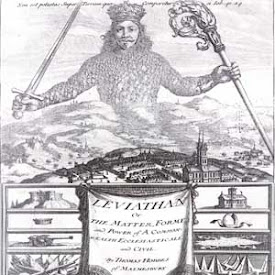 Leviathan (Books I and II)

Leviathan, or The Matter, Forme and Power of a Common Wealth Ecclesiasticall and Civil, commonly called Leviathan, is a book written in 1651 by Thomas Hobbes. It is titled after the biblical Leviathan. The book concerns the structure of society (as represented figuratively by the frontispiece, showing the state giant made up of individuals), as is evidenced by the full title. In the book, Thomas Hobbes argues for a social contract and rule by a sovereign. Influenced by the English Civil War, Hobbes wrote that chaos or civil war - situations identified with a state of nature and the famous motto Bellum omnium contra omnes ("the war of all against all") - could only be averted by strong central government. He thus denied any right of rebellion toward the social contract. However, Hobbes did discuss the possible dissolution of the State. Since the social contract was made to institute a state that would provide for the "peace and defense" of the people, the contract would become void as soon as the government no longer protected its citizens. By virtue of this fact, man would automatically return to the state of nature until a new contract is made. Summary from Wikipedia. (11 hr 33 min)

III - Of the Consequence or Train of Imaginations

V - Of Reason and Science

VI - Of the Interior Beginnings of Voluntary Motions, Commonly Called the Passi…

VII - Of the Ends or Resolutions of Discourse

VIII - Of the Virtues Commonly Called Intellectual; and Their Contrary Defects

IX - Of the Several Subjects of Knowledge

X - Of Power, Worth, Dignity, Honour and Worthiness

XI - Of the Difference of Manners

XIV - Of the First and Second Natural Laws, and of Contracts

XV - Of Other Laws of Nature

XVII - Of the Causes, Generation, and Definition of a Commonwealth

XVIII - Of the Rights of Sovereigns by Institution

XIX - Of the Several Kinds of Commonwealth by Institution, and of Succession to…

XX - Of Dominion Paternal and Despotical

XXI - Of the Liberty of Subjects

XXIII - Of the Public Ministers of Sovereign Power

XXIV - Of the Nutrition and Procreation of a Commonwealth

XXVII - Of Crimes, Excuses, and Extenuations

Read by Smokey B.

XXVIII - Of Punishments and Rewards

XXXI - Of the Kingdom of God by Nature

helps you understand the world

the purpose of this book is to give you a insight into how humans operate and works its way out to Nations. this is a great book for just getting a foundation if you're ever lost and you're trying to find some Foundation to your life, this is a good book

The readers are good though I think the book itself is nonsense.

it makes you think a great deal about the current government in which one is subject.

Many thanks to the readers! Listened to the book 4 times.

Remarkably seamless for a multiplayer reading!

None of the tracks have titles -