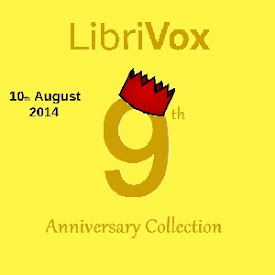 This year is the 9th anniversary of our illustrious community, and readers have found and recorded 99 items with a connection with the number nine... neuf... neun... nueve...nove... девять...εννέα... There are short stories, poems, bible readings, non-fiction articles and songs.

The items are mostly in English, but this year we have one or more contributions in ten other languages: Ancient Greek, Dutch, German, Japanese, Latin, Polish, Portuguese, Romanian, Russian and Ukrainian. (Summary by RuthieG) (27 hr 0 min)

In New York with Nine Cents

A Nine of Engineers

A Novel in Nine Letters

The Ninety and Nine

Preservation of Nine Seamen from Thrilling Narratives of Mutiny, Murder and Pir…

The Golden Apple-Tree and the Nine Peahens

Chapter 9 of Agent Nine and the Jewel Mystery

Section 9 from the Doctrine & Covenants

Thirty-nine reasons why I am a vegetarian

A Dirge for a Ninth of AB

The Island of the Nine Whirlpools from The Book of Dragons

Ninety-nine in the Shade

Nine Family Dinners and How to Prepare Them

Nine Points of the Law

Skulls and Crossbones and Nine-leaved Clover

Chapter 5 of Nine Years at the Gold Coast

Chapter 9 of Life in Camp: A History of the Nine Months' Service of the Fourte…

At Half Past Nine (song)

A true history of the massacre of ninety-six Christian Indians, at Gnadenhuette…

Nine Points of the Law

9th Ode of the Paschal Canon

Read by A LibriVox Volunteer

Excerpt from Two Hundred and Nine Ways of Preparing the Apple

Nine Elections in One Year

The Prince with the Nine Sorrows

The Nine Parts of Speech

A narrative of a nine months' residence in New Zealand in 1827: Chapter 9

The Nine-Banded Armadillo, from Quadrupeds, or Outlines of a Popular History of…

Poem IX from A Shropshire Lad

The Nine Lives of a Cat: a Tale of Wonder

Nice Collection of a "Nine" Theme

An interesting concept for a 9th anniversary. Volunteers do a nice job with readings. Variety of subject matter is impressive. Some subjects more interesting than others. Several warrant further research and reading. Good job, LibriVoxers!