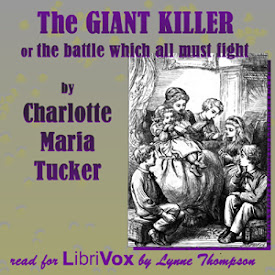 The Giant-Killer - or the Battle Which All Must Fight

Ten year old twins. Constantine and Adolphus are chagrined to be shipped off to a private tutor in the country. Their lot appears worse when they meet their host and his family, consisting of a wife, son Aleck (who imagines himself the perfect student) and two little girls! On top of that, they are expected to study. Fun seems in short supply when they are not even allowed to pull the cow's tail, and there is no second dinner provided. This allegorical tale can be a simple, amusing story or a lesson to us all. - Summary by Lynne Thompson (3 hr 21 min)

The Prisoner In Darkness

This classic children's book is an allegory within a story. A vicar and his wife and three children have invited into their home two spoilt and naughty boys to be educated by the vicar alongside his son. The mother of the household reads an allegorical fantasy to the children about conquering sin in your life. Her hopes are that the children learn from the story and apply the lessons to their own lives. Given the time at which the book was written, the author was probably quite innovative in her plot. Christian books for children of the past tended to be much more didactic and realistic about the perils of naughtiness. But it was too much for me. The two spoilt guests really were brats, and I couldn't stand them. The vicar's children weren't perfect, but they were very good, especially the two girls. They just didn't seem like normal children. So I gave up about halfway through. Apparently I'm in the minority as the book has been highly rated on Goodreads. I guess that's me though, when I read a book I want a story, not a Sunday school lesson. The narrator was excellent and many thanks are due to her for her effort.