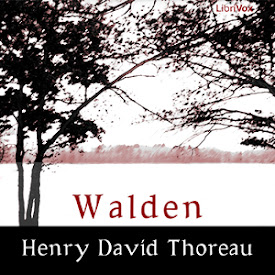 Walden (first published as Walden; or, Life in the Woods) is an American book written by noted transcendentalist Henry David Thoreau, a reflection upon simple living in natural surroundings. The work is part personal declaration of independence, social experiment, voyage of spiritual discovery, satire, and manual for self-reliance. First published in 1854, it details Thoreau's experiences over the course of two years, two months, and two days in a cabin he built near Walden Pond, amidst woodland owned by his friend and mentor Ralph Waldo Emerson, near Concord, Massachusetts. The book compresses the time into a single calendar year and uses passages of four seasons to symbolize human development. - Summary by Wikipedia (11 hr 58 min)

Where I Lived, and What I Lived For

The Pond In Winter

Yes, the volume is a bit low, but Nick Bulka's recording of Walden appropriately captures the whimsical tone that I believe Thoreau intended. Definitely worth a listen.

But the latin was mostly unintelligible, and the last chapter had some missing words

i think the voice is great

pump up the volume

ive wished for more volume on several Librivox recordings. This one I think the worst in that respect