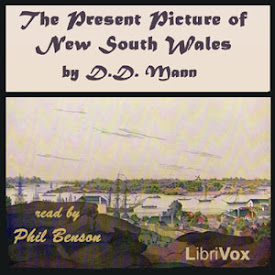 Convicted of forgery at the age of 23, David Dickenson Mann narrowly escaped hanging and was transported instead to New South Wales, where he arrived in 1799. Three years later he received a full pardon and was soon working in the secretary's office of the colonial government. Mann fell foul of Governor William Bligh and was about to leave for England, but in 1808 found himself in favour with the rebel government that deposed him. The Present Picture of New South Wales, dedicated to the recently arrived Governor John Hunter, gives a detailed account of the colony . It includes a brief history, an A-Z encyclopedia of political and economic progress and Mann's own ideas on the future development of New South Wales. Mann returned to England in 1809, where he published his book in 1811, dying in the same year. - Summary by Phil Benson (4 hr 26 min)

Recommended for people interested in the history of early Sydney

David Mann was shipped to Australia for forgery in 1799, worked his sentence, and entered the civil service in the young colony. This book was published when he returned to England in 1811. It is dedicated to Governor Hunter, so its bias is overt in the cheerful way of Victorian-era sycophancy. Parts of the book are dry reading. The lengthy lists of how man of each animal the colony has, for example, are a trial to get through. I found the material about the availability and prices of the various foodstuff interesting because I’m into culinary history (we used to be big on purslane, people…). The later sections are made up of recommendations for administrative reform, which forces the author into a fine balancing act, since he does not want to criticise the Governor.