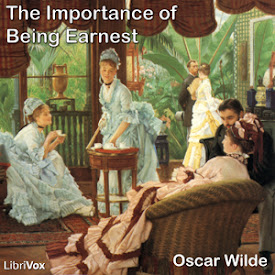 The Importance of Being Earnest

The Importance of Being Earnest is a classic comedy of manners in which two flippant young men, in order to impress their respected beloveds, pretend that their names are “Ernest,” which both young ladies believe confers magical qualities on the possessor. It was first performed for the public on February 14, 1895 at the St. James’ Theatre in London, and is regarded by many critics and scholars as being the wittiest play in the English language. (Summary from Wikipedia.org)

What a worth while rendition. The cast was inspired.

What a worthwhile rendition. The cast was definitely inspired. Every character brought to life, every jest and pun sincere. Oscar Wilde would have been proud.

I cannot imagine how many times I have heard this title and dismissed it as a stuffy, Victorian play. The wordplay and comedic timing of the script produced multiple "LOL" moments, despite being restricted to volunteers whose voices were spliced together. The technical limitations of volume and background noises quickly fade and allow the listener to enjoy the play, even if not as Oscar Wilde originally intended. Thank you, Librivox and readers for your contribution. This is now on my short list of must-sees.

My dear fellow, Bunberry - the humour is extraordinary!

i have enjoyed the story it is a piece of art the one who read this story or listen to it can easely feel as if a part of it well done !nice work from the narrators especially john's voice

Have always loved this story,

was now even better listening to it, but some of the readers... It was good to listen to one of my favourite stories.

Another great work by the witty Wilde.

Oscar's works never fail to amuse. His stories feel timeless and aren't antiquated as some pre-21st century writing does. His characters are very well developed and are brought to life, thanks to the Librivox volunteer readers. If you aren't already a fan of Oscar's, I can't recommend this author enough. From children's books to world plays, his talent never ceases to entertain and delight. It's a terrible shame England imprisoned him for his homosexuality, which invariably lead to his early demise; his alcohol and drug use likely didn't help his situation. We can only imagine what other gems he would have bestowed upon us if he had lived longer than his 40's. The only reason I didn't give it 5 stars is the reading is a bit too dry for a comedy. However, this didn't deter me from enjoying it none the less.

If you are looking for a light chuckle this will do. Not for the serious. Readings seem a bit choppy as each character is read my a different person and play is pieced together recordings. It was a bit annoying at first, but I got used to it. This is written as a play, so that also adds to the choppy-ness of the readings. Not my favorite , but ok. Not sure how this became a classic....

very very historical evergreens set of saints and sinners perspective multi comparative in an outstanding position, he found a lot what is to discuss today - lovely traditional way of thinking -so friendlier Oscar Wilde set the words the actrices are speaking so harder the solution of this special time he lived in follows. So his stil doesl a noble conversation of a time which does not know more about each others like they just want to know.