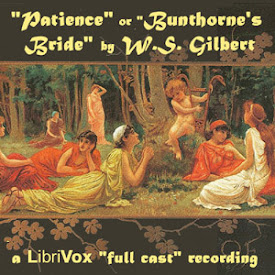 A comic operetta which is a satire on the themes of fashion and pretension and hero-worship. Bunthorne is a poet who pretends to be highly "idealised" in order to impress the ladies. They all worship him, except for Patience, the dairy maid, who is the only one he loves. However, his grand plan goes awry with the arrival of Grosvenor who is more idealised and more poetical then he is. The ladies all flock after Grosvenor instead, until Bunthorne curses him with poor fashion sense and stoutness! But will the curse bring Bunthorne his Patience? (Summary by Beth Thomas)

I hoped this rendition of Gilbert and Sullivan's "Patience" would be as entertaining as Librivox's "Pirates of Penzance." But it was very difficult to listen to. The readers/actors did not sound like they were having fun, and their talents varied wildly. The dialog was too frequently punctuated by superfluous stage directions. The recitation of Gilbert's lyrics was slow, lacking the lively rhythms of Sullivan's tunes. It was also painfully obvious that each reader had recorded their part in solitude, because the combined choruses were a jumble of words--simultaneously using the conventional pronunciations and the humorous pronunciations that Gilbert intended.