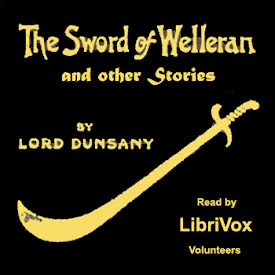 The Sword of Welleran and Other Stories

The Sword of Welleran and Other Stories is the third book by Irish fantasy writer Lord Dunsany, considered a major influence on the work of J. R. R. Tolkien, H. P. Lovecraft, Ursula K. Le Guin and others. It was first published in hardcover by George Allen & Sons in October, 1908, and has been reprinted a number of times since. Issued by the Modern Library in a combined edition with A Dreamer's Tales as A Dreamer's Tales and Other Stories in 1917.

The book is a series of short stories, some of them linked by Dunsany's invented pantheon of deities who dwell in Pegāna, which were the focus of his earlier collections The Gods of Pegāna and Time and the Gods. One of the stories, "The Fortress Unvanquishable, Save for Sacnoth," was afterwards (1910) published by itself as a separate book. - Summary by Wikipedia (3 hr 49 min)

The Sword of Welleran

The Kith of the Elf Folk, Ch 1

The Kith of the Elf Folk, Ch 2

The Lord of Cities

The Doom of La Traviata

On the Dry Land

This is a beautiful series of early fantasy stories, by a master of the genre. Actually, I’d go further, Dunsany’s work helped to define the genre. The Sword of Welleran seems like sword and sandal fantasy, but that’s because so many people have stolen and recycled his ideas. The plots are thin, but as an exercise in style, these are wonderful. I’d particularly recommend the eponymous short story and The Fortress Unvanquishable, Except for Sacnoth.

A marvelous collection of chilling and uplifting tales

this is one of the best short story collections ever. each reader seems to appreciate the timeless tales, even though they disagree on pronunciation at times. this collection has some of the best heroic fantasy which inspired 20th century writers, as well as dark tales that stand alongside Poe

Typical mix of Dunsany material, poetic,archaic,written to be read aloud by a fire in a longhouse. Mixed bag of stories. I thought the whirlpool both terrible and silly but the kith of the elf folk was wonderful and strange and beautifully read. All the readers tried hard to capture the minstrel like quality needed. Good.

Good readers, and each story is interesting and different from the one before. I’d never read Lord Dunsany before, but can see how he influenced other writers who followed. If you like early sci-fi/fantasy you’ll enjoy this collection.