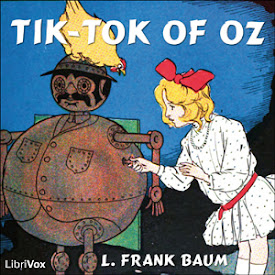 Betsy Bobbin encounters many strange and exciting adventures and people in the land of Oz; a side-plot is Queen Ann of Oogaboo's mission to take over Oz. (Summary by Ryan T.) (5 hr 17 min)

The Roses Repulse the Refugees

Ruggedo's Rage is Rash and Reckless

A Terrible Tumble Through a Tube

The Famous Fellowship of Fairies

The Lovely Lady of Light

The Long-Eared Hearer Learns by Listening

The Land of Love

This is the best book ever! I have loved oz since I was 3 years old! I am 7 now!

i am welsh so i had no troble lisaning

What a good book!

I always have wondered how Betsy came to Oz, and how Kalico became the Nome King. This book explains that and more. Fiori S. Do

Some readers?accents are hard to understand . What a pity. Anyway , thanks for the reading .

so entertaining. readers are great! hilarious and witty 😁

Just an observation, but I've noticed that L. Frank Baum never really titled any of his books the way you would expect him to. If he had been more traditional in his titling, this book could have likely been known as Shaggy Mans Lost Brother, or The Nome King gets deposed. But then again, if you're going to call it Tik-tok of Oz, it could have just as easily been called the Rose Princess. Tik-Tok is actually a relevtively minor character in this book and does not get a lot of lines or face time, but the same can be said for Ozma of Oz and The Lost Princes of Oz, which I believe can both be found here at archive. That said, the book itself is actually one of the better Oz books in the series, and it is mainly about a small army who wants to take over the world. It features what I believe to be the first fall of the Nome King, and it also features the Shaggy Man who wishes to rescue his nameless, and apparently very ugly brother. You'll see some great characters in this book like The Rose Princess Ozga, Tik-Tok (of course), The Nome King, Shaggy man, Betsy Bobbin, Donkey, and others. But some of the more well known characters like Dorothy, Ozma, the Cowardly Lion, Hungry Tiger, and Toto only make cameos at the end. But as usual, it does have a happy ending. This particular book is put together well with a variety of voiceover people who range from flat to very lively. My favorites are always the readers who give the characters their own voices, and I'm happy to say that you see those pieces of voice work at the most interesting times in the book. But then again, all of these free oz audio books are a real treat! Thanks. J. Mathew Bloom

I love this book!

I have loved oz's charm since I can remember. This book is an oz classic.

The dragon and the tunnel to underground are so fun to imagine. The surprise with Toto at the end is nice. It is a little harder to understand than some of the others in the series so far, as the reader seems to change each chapter.