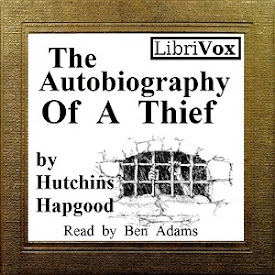 The Autobiography of a Thief

I met the ex-pickpocket and burglar whose autobiography follows soon after his release from a third term in the penitentiary. For several weeks I was not particularly interested in him. He was full of a desire to publish in the newspapers an exposé of conditions obtaining in two of our state institutions, his motive seeming partly revenge and partly a very genuine feeling that he had come in contact with a systematic crime against humanity. But as I continued to see more of him, and learned much about his life, my interest grew; for I soon perceived that he not only had led a typical thief's life, but was also a man of more than common natural intelligence, with a gift of vigorous expression... I therefore proposed to him to write an autobiography. He took up the idea with eagerness, and through the entire period of our work together, has shown an unwavering interest in the book and very decided acumen and common sense. The method employed in composing the volume was that, practically, of the interview. From the middle of March to the first of July we met nearly every afternoon, and many evenings, at a little German café on the East Side. There, I took voluminous notes, often asking questions, but taking down as literally as possible his story in his own words; to such a degree is this true, that the following narrative is an authentic account of his life, with occasional descriptions and character-sketches of his friends of the Under World. Even without my explicit assurance, the autobiography bears sufficient internal evidence of the fact that, essentially, it is a thief's own story. - Summary by Hutchins Hapgood (from the Preface) (6 hr 14 min)

Chapter I - Boyhood and Early Crime

Chapter III - Mixed-Ale Life in the Fourth and Seventh Wards

Chapter IV - When the Graft Was Good

Chapter VI - What the Burglar Faces

Chapter IX - In Stir and Out

Chapter X - At the Graft Again

Chapter XI - Back to Prison

Chapter XII - On the Outside Again

Chapter XIII - In the Mad-House

Chapter XIV - Out of Hell

Wow! An amazing tale for sure.

I wasn't sure what to expect from this book but am very happy to have listened to it. The reader was phenomenal. The story itself really takes you into the world of o a thief. I would recommend this book to anyone.

the autobiography of a thief

Autobiography of a thief

Interesting nonfiction book set a century ago. Many of the scenarios are the same day as then. Descriptions of politicians, corruption, and addictions are just as relevant.

An interesting lb sight into the world of the thief there trials and tribulations and the way society is blinkered in their view of the 'wrongdoers ' of the world .

The reader is excellent. And the book is a worthwhile insight into the world of petty crime and the human mind.

The narrator did a fantastic job with this book.