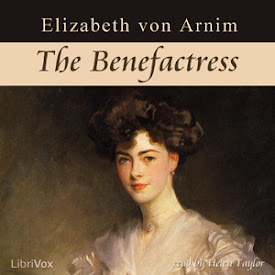 Anna Estcourt, twenty-five and beautiful, is the penniless ward of her distant brother and his exasperating wife. Turning down all offers of marriage, scornful at the thought of leaning on a man for help and comfort, she thinks only of the independence which seems an impossible dream. But out of the blue Uncle Joachim, her mother's brother, leaves her a handsome property in Germany. Her longed for independence is within her grasp, and though it's a rocky beginning with the locals, she loves her new home. Keen to use her new-found wealth for the benefit of others, she embarks on a plan to throw open her doors to distressed gentlewomen - a project which takes a far greater physical and emotional toll than she could have imagined. Although she maintains that she is not interested in men, might the friendship of her neighbouring landowner, Axel Lohm, make her new life a little easier to bear?...

A warm, charming story which is packed with Elizabeth von Arnim's trademark humour and wry observation of character. It's also a perceptive critique of society's constraints on women, holding up a glass to all the artfulness and falseness of 'femininity' - but despite its strong feminist overtones, it manages simultaneously to be a wonderful romantic comedy! - Summary by Helen Taylor (11 hr 28 min)

the reader has a fantastic voice and is clear and easy to understand. the story is about a young lady who is finally financially free and the good she intends to do with the money... and how hard it is to make others happy. there is a love story in it as well and an arsonist. the story goes along easily and is enjoyable but it hits the climax late in the story and then just ends with a rushed conclusion that lacks details. a good story that could have been better.

If I were only reviewing the quality of the recording this would be an enthusiastic 5 stars. Helen Taylor is an absolute treasure. Regarding the novel, however, I realize this is one of Elizabeth von Arnim's earlier works. Yes, there is certainly humor and interesting characters. But in no way does it compare to The Enchanted April or even Vera, in my opinion. We are left with too many loose threads at the end. Our heroine's motives are sometimes too inexplicable. Having said this, there is plenty to enjoy in this novel. For fans of The Enchanted April I should mention that some aspects of this novel seem to foreshadow that later work. I see the genesis of ideas that were better fulfilled in The Enchanted April. If given the option I would give the reading 5 stars and the novel 4 stars. Since I do not have that option I must go with quality of recording and say 5 stars.

... and a good book. The author's experience marrying into Pomeranian aristocracy give the story more than a touch of authenticity. I enjoyed it... but have to say that some of the undertones are hard to take. Von Armin's own history makes me wonder about the 'a woman needs a man to complete her' message in this book. And the anti-Semitic stuff was unsettling considering the Dreyfus affair (the book was published in 1901) and what was to come in the 1930s. It's best to take the attitude that von Arnim (an Aussie) was just being ethnographic and leave it there. Helen Taylor is a great reader! Characterization, tone, speed -- everything is just as you'd want it. Hard to believe i didn't have to pay for this because it's of high professional quality. More please! TheBookworm (Manchester, UK)

I thoroughly enjoyed the book. In the end, I didn't see the "a woman needs a man" line of thought as being supported by this book. I think that in this story, the man needed the woman as much as the woman needed the man; and only when the woman saw that she could help the man in a way no one else could or would, did she take the final step she did. (I'm trying to not say too much!) I was going to do some work today; instead, I finished listening to the book. That's how good I considered it. :) Very enjoyable reader as well. Thanks for sharing this with us!

A most enjoyable novel, with a brilliant narrator

Okay, you need to suspend belief, because it is implausible that a young, single and dependent woman, would want to spend her inheritance taking care of impoverished aristocratic woman. She is naïve bordering on stupid. BUT the author fully understands snobbery, the book is quite funny at times, and you just want to keep on listening. It is the Helen Taylor who really keeps you engaged. She is beyond brilliant to the extent that I will listen to all the books she has narrated. Thank you Helen. I have spent a wonderful 11 hours listening to you.

Perfect except for the ending

Arnim is a wonderful writer, and the reader is extraordinarily gifted. I loved the whole story, except that after 27 chapters leading up to the ending she concludes it with far too brief a description. It's the only part of the book that doesn't thoroughly and entertainingly describe the experiences of the main characters. Anna and Axel deserve better. I expected at least a couple of more chapters of the good stuff! :)

Helen Taylor reads this so beautifully she makes silly Anna at least somewhat useful. :) The story is enjoyable and interesting for the first 20 or so chapters and then becomes long winded, a bit over the top and ultimately actually irritating in its sudden ending. I suspect the author lost her way and just decided to finish it quickly. :)

A bit of Sugar with your Sap?

This is so sweet it could just about rot your teeth, though well written, it practically reeks of good intentions & the desire to end with, " And they all lived Happily ever after". The LibriVox Volunteer is excellent in every aspect of her performance, therefore I give this a full half star.