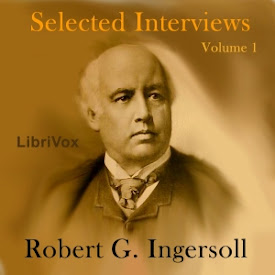 A controversial lecturer, brilliant lawyer, and arguably the most famous orator of the mid to late 1800's, Ingersoll railed against the absurdities of the Bible and cruelties of Christianity, particularly the horrific notion of "eternal damnation". He tirelessly supported the arts, education, science, women’s rights, abolition, home, family, children, and human liberty. As a leader of the Freethought movement, his creed was: “Happiness is the only good, Reason the only torch, Justice the only worship, Humanity the only religion, and Love the only priest.” He was often attacked in the press. Here are 30 published interviews in which Ingersoll spoke extemporaneously, bitingly, sometimes hilariously, on a wide range of topics with newspaper reporters of the day. (Compiled from The Works Of Robert G. Ingersoll, Volume 8, Dresden Edition, Pub. 1900. Summary by Michele Fry (5 hr 45 min)

How To Become An Orator

My Belief and Unbelief

Psychical Research and the Bible

The Sunday Laws Of Pittsburg

Reply To The Christian Endeavorers

Mr. Beecher, Moses and the Negro

Sunday A Day Of Pleasure

A Reply To The Rev. Mr. Lansing

Eternal damnation is something that could occur if you murder, or rape, or something else that awful. And, sadly, if you do get damned for eternity, given the extremities required to become damned in the first place, I would sadly have to say there’s an extremely good chance you deserved it. As always, it’s ok if you disagree with me, I am just voicing my opinion!

I'm so proud of all my readers on this project, both men and women, Americans and Europeans, who joined in to bring Ingersoll's personality alive. They proved that his spirit is not at all about gender or nationality, but ATTITUDE! Grateful to you all. Michele Fry, Book Coordinator