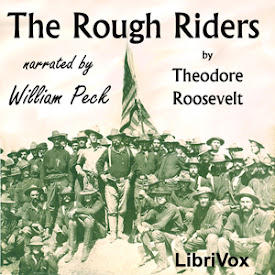 Theodore Roosevelt's personal account of The Rough Riders, the name affectionately bestowed on the 1st United States Volunteer Cavalry, one of three such regiments raised in 1898 for the Spanish-American War and the only one to see action. Roosevelt, serving first as Lt. Colonel and 2nd in command, gives a rousing depiction of the men and horses, equipment, talent, their trip to Cuba, battle strategies, losses, injuries and victories. He says: "In all the world there could be no better material for soldiers than that afforded by these grim hunters of the mountains, these wild rough riders of the plains . . accustomed to handling wild and savage horses . . to following the chase with the rifle, both for sport and as a means of livelihood . . they were hardened to life in the open, and to shifting for themselves under adverse circumstances . . My men were children of the dragon's blood, and if they had no outland foe to fight and no outlet for their vigorous and daring energy, there was always the chance of their fighting one another: but the great majority, if given the chance to do hard or dangerous work, availed themselves of it with the utmost eagerness." (Michele Fry) (6 hr 31 min)

Appendix B - Col. Roosevelt's Report to the Secretary of War of September 10th …

Appendix C - The 'Round Robin' Letter

These were men, there was no question. I don't believe America could recruit such men today. But I thank Heaven for those who boldly offer themselves and give all they have to offer including, at times their lives. This book makes me proud of and appreciate those who keep us and our friends free.

Excellent book demonstrating the growth of the American experience and the. recovering national spirit 30 years after the Civil War near the end of the 19th century.

A really great story, full of unbelievable facts about the U.S. Cavalry and the Spanish-American war, mistakes the military makes, why those men volunteered to fight, and Teddy Roosevelt's account of the entire battle. 5 stars because it is so personable, charming, informative, and the reader did a great job. I felt like I was listening to Teddy himself.

In all of my time on this earth I’ve never heard of any of this historic time and the people who voluntarily served. The school systems throughout this nation are a dismal failure for not even attempting to teach one tenth of the lives our nation’s true heroes.

Teddy was a Beast!!!

I'm a military wife/mom. it's wonderful to hear Teddy Roosevelt's description... it's a huge bonus to hear PEOPLE described whom I have only known as the sign outside a military installation,. Too Awesome!

An excellent reading of a thoroughly engaging text. The consistently high quality is very professional and stands up even at at playback speeds.

A must read for men, and those raising men