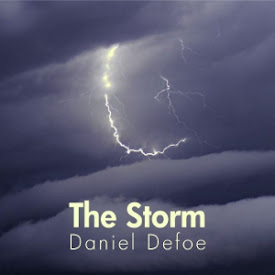 The Storm (1704) holds a special place in the writings of Daniel Defoe. Widely considered a founding document of modern journalism, The Storm narrates the calamitous events of November 1703 that are framed by the author in the first four chapters. These are followed by verbatim eyewitness accounts, solicited from survivors through a newspaper advertisement that Defoe placed shortly after the hurricane struck. Defoe is primarily known for his later fiction, loosely based on historical calamities, such as his Journal of the Plague Year (1722), and by fictionalized novels purporting to be first-person accounts, including Robinson Crusoe (1719) and Moll Flanders (1722). It can be argued that The Storm was the journalistic crucible in which the master realist Defoe forged his later novelistic artistry, with its penchant for "the telling detail." In fact, his fiction novel The Plague Year remains a required reading for journalism students to this day, side-by-side with the non-fiction account of The Storm. –Denny Sayers (9 hr 8 min)

Of the Effects of the Storm, Damages in the City of London

Of the Effects of the Storm, Damages in the Country

The following Letters, tho' in a homely stile

From Littleton in Worcestershire

At Brenchly in the Western Parts of Kent

It has been impossible to give an exact relation

Of the Damages on the Water

From Newport and Hastings the following Accounts

Of the Damage to the Navy & Of the Earthquake

The two following Letters & The Conclusion