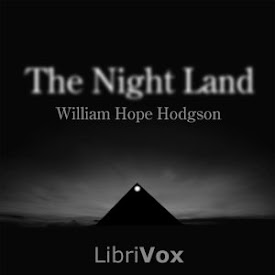 The Sun has gone out and the Earth is lit only by the glow of residual vulcanism. The last few millions of the human race are gathered together in a gigantic metal pyramid, nearly eight miles high – the Last Redoubt, under siege from unknown forces and Powers outside in the dark. These are held back by a Circle of Energy, known as the "air clog", powered from a subterranean energy source called the "Earth Current". For millennia, vast living shapes—the Watchers—have waited in the darkness near the pyramid. It is thought they are waiting for the inevitable time when the Circle's power finally weakens and dies. Other living things have been seen in the darkness beyond, some of unknown origins, and others that may once have been human.

To leave the protection of the Circle means almost certain death, or worse an ultimate destruction of the soul. As the story commences, the narrator establishes mind contact with an inhabitant of another, forgotten Lesser Redoubt. First one expedition sets off to succor the inhabitants of the Lesser Redoubt, whose own Earth Current has been exhausted, only to meet with disaster. After that the narrator sets off alone into the darkness to find the girl he has made contact with, knowing now that she is the reincarnation of his past love.

H. P. Lovecraft describes the novel as "one of the most potent pieces of macabre imagination ever written". Clark Ashton Smith wrote of it that "In all literature, there are few works so sheerly remarkable, so purely creative, as The Night Land. - Summary by Wikipedia (18 hr 54 min)

Chapter I - Mirthdath the Beautiful

Chapter IV - The Hushing of the Voice, Part 1

Chapter IV - The Hushing of the Voice, Part 2

Chapter V - Into the Night Land

Chapter VI - The Way That I Did Go

Chapter VIII - Down the Mighty Slope

Chapter X - The Maid of the Olden Days, Part 1

Chapter X - The Maid of the Olden Days, Part 2

Chapter XIV - On the Island, Part 1

Chapter XIV - On the Island, Part 2

Chapter XV - Past the House of Silence, Part 1

Chapter XV - Past the House of Silence, Part 2

Chapter XVI - In the Country of Silence, Part 1

Chapter XVI - In the Country of Silence, Part 2

This book is truly a work of art. The main character had me hooked I had to know what was going to happen next. The story is beautiful, full of love, horror, fantasy, and action. May get slow at parts but trust me just keep listening it will be worth it.

Excellent job of creating an otherworldly feel. There are several things I didn't enjoy but I did make it to the end.

Difficult but rewarding. This was written in the very early 20th century --it takes the archaism of Victorian and Edwardian fantasy farther than even Dunsany and Eddison. This work was written pre-WWI, so old fashioned attitudes are not surprising

One of the single most staggeringly bizarre and incredibly fantastic pieces of weird fiction ever written. An otherworldly nightmare on paper. A far-far-future dark world beyond all normal conception with the feeling of a strange dream. And aside from a few repetitive flourishes and a few passages of outdated, backwards and regrettablely misguided views of women, it is an incredibly powerful romantic dark fantasy adventure epic recounting one of the most heroic acts of love ever dreamed into prose.

Amazing postapocalyptic 1912 novel in the style and wording of the time. Warning. If you're a PC fanatic and easily offended about the way women were thought of during that era do not listen. Mark did a fantastic job of reading.

Story was predictable, and language was tedious. World was imaginative.

top marks for the narrator in that he persisted with this rambling monologue. why the archaic language redolent of the King James Bible I have no idea it is just very very annoying. the same themes are repeated ad nauseam by this author. this work would benefit from being reduced in size by about 95% and then it might just make a possible decent science fiction short story. if you suffer from Insomnia then this book will help you no end getting off to dreamland.

this book was great! i can see it's hard for some to understand and appreciate this book, having no understanding of the time it was written. but if you push past that it's just an amazing adventure. I like the main character to a paladin of light pushing into the darkness to find his one true love. to find her and deliver her to safety is his goal! so we'll read just amazing thank you